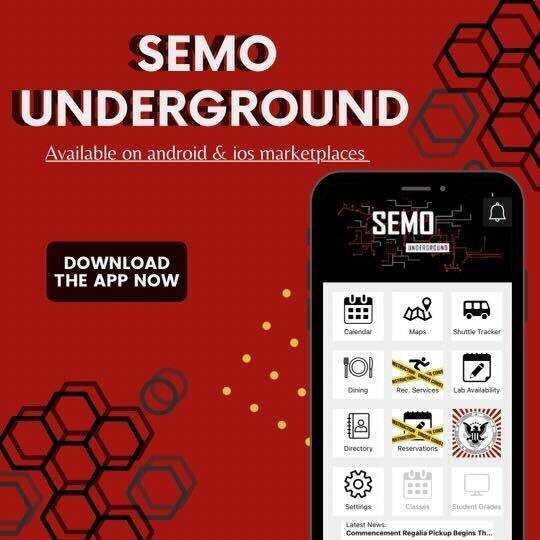 As part of a capstone project, senior computer science major Zachary Locke launched a smartphone application called "SEMO Underground.” The app SEMO Underground supplements applications on SEMO’s portal system and is based on the design of the previous SEMO app.

Locke worked with his team and the Student Government Association (SGA) this semester to develop the student-focused app.

“When we set up the app, we reached out to the student government to ask them what sorts of things they wanted to see in the application,” Locke said. “We based a lot of the original design off of the previous existing app. We also brainstormed with ourselves about the things we would like to see in a SEMO student-focused app.”

SEMO Underground was designed to supplement apps on the portal system. The portal system is the login page where students can provide a username and password to gain access to SEMO’s education organizations’ programs and other learning-related materials. SEMO Underground links with multiple systems like the meal system, event calendar, lab availability, recreation services, shuttle tracker and more.

SEMO Underground first started out as an idea in January. Locke and his team met with SGA and the executive officers to discuss their plan for the app and hear their thoughts.

After this initial meeting, Locke said he and his team went into a brief designing phase during which one of the developers from the team started creating designs for the pages. Then, they went into the development part of the process and started writing the front end, everything an app user would see, of the app’s pages.

Next, Locke said his teammates started working on connecting to the back end of the application and pulling information from other systems and databases to show what the app offers. Locke’s team had to pull information from the meal system to connect to the dining page in the app, as well as do the same thing for the rest of the pages within the app.

“A lot of my team came from a separate security background, and there’s not a lot of development that goes into their major field,” Locke said. “That was definitely a challenge, trying to figure out how we were going to split up the workload for each person on the team.”

The app had 236 IOS downloads and 36 Android downloads in more than a week. It has received positive feedback from students who have downloaded it, so far.

Junior communication studies major Emma Harley downloaded the app on Wednesday, April 23. She said she thinks the app will be helpful for students and is excited to use it.

“This definitely will be useful for SEMO students,” Harley said. “The app is a great way to have easy access to many different things like the student government agenda and minutes, because I would have never known where to go to find that information.”

Locke said in the beginning, there were some challenges that he and the team ran into.

“We’ve also along the way ran into some challenges with trying to connect to different systems. We met with DPS today and with Everbridge about getting them involved and on the app,” Locke said.

The app is still new and is a work in progress, Locke said. He plans to add an alert page, event page and an Arrow newsfeed.

Locke and his team expect the number of downloads to continue to rise as they reach out to SGA and other departments to get official advertising.