Effects of Number 5: “How Albert Pujols’ homecoming has inspired on one of SEMO’s biggest sluggers” 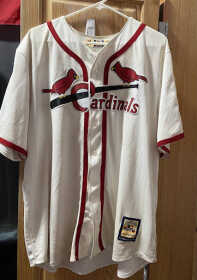 El Hombre. The Machine. No. 5. Kids from Missouri have emulated and looked up to St. Louis Cardinals’ legend Albert Pujols throughout their childhood, whether because of the open batting stance or the strut around the base paths after a 400-foot blast at Busch Stadium.

After the signing of the former three-time MVP took place March 27, social media was flooded with a sea of red. Many of SEMO’s students were happy about this move, including senior catcher Andrew Keck.

“I think it’s pretty cool to have him back in the Cardinals uniform, especially seeing him on opening day in front of the home crowd,” Keck said. “He just brings back a lot of memories of being a young baseball player in St. Louis.”

The effect Pujols has had on baseball has been second to none as day in and day out, he not only has left a long-lasting mark on the sport, but has also impacted the way young athletes play the game.

Keck mentioned how amazing it was to see the homeruns that Pujols in Busch Stadium and how unreal it is to watch him play in his hometown.

“It was just fun to watch him hit home runs in St. Louis and to see how far he could actually hit some of those balls,” Keck said. “Just to see how good of a player he was and what he actually meant to the Cardinals before he came back was awesome.”

Pujols, going into his last season, is one of the most-emulated players of all time, whether it be because of his slow, measured stance or the cool, confident stare he gives the pitcher through each of his at-bats. “Imitation is the sincerest form of flattery,” is an effect that Pujols has had on many fans and aspiring big leaguers, including Keck.

“As a young kid, I think you always try to imitate some of your favorite players, and I would definitely use the Albert swing in the backyard,” Keck said. “Seeing him and what he has done has to inspire you, and [I] could only dream to do half of what he has done in his tenure.”

Keck was and is amazed by how professional Pujols’ approach always is and how he looks to follow that same approach every time going out on the field.

“One thing I’ve actually tried to take from what he does is just his approach,” Keck said. “His professional approach is something that I obviously haven’t mastered, but am always looking for different ways to get that approach down.”

Keck said his favorite memories of Pujols are seeing the home runs he hit on a consistent basis.

“I think my favorite memories of Albert are from when he would just hit those moonshots into the bleachers and was just really cool to watch,” Keck said.