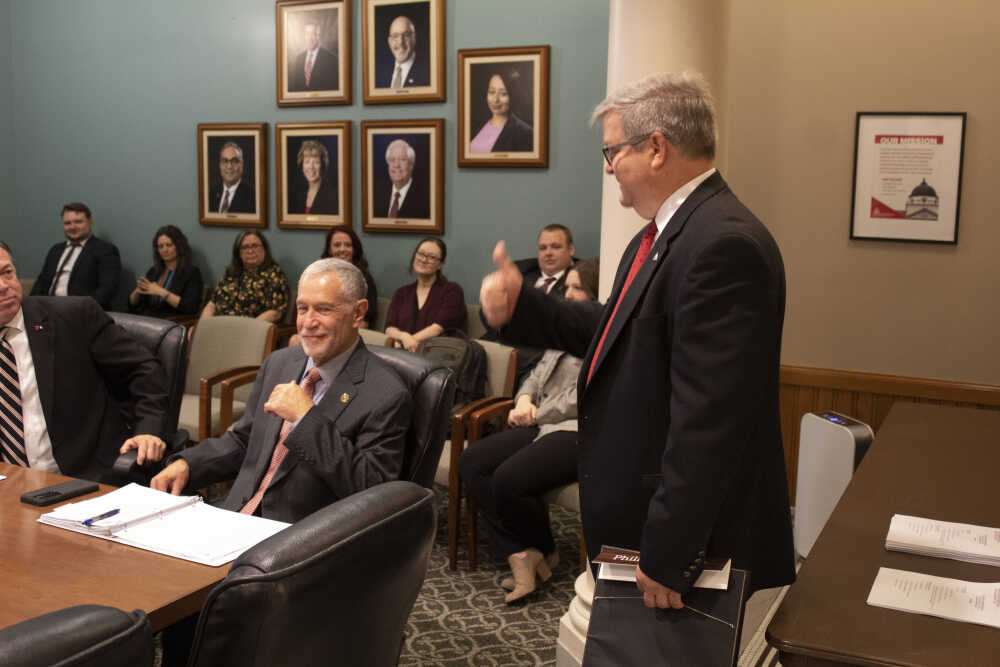 Former governor Phillip Britt walking off with his Resolution of Honor while giving the tumbs up to to the governors. Phillip Britt has been a part of the board since 2015.
Photo by Matt Morey

On May 13, Southeast Missouri State University’s Board of Governors met Friday to discuss name changes to curriculums and designs for the new Houck stadium construction. The board also approved a Resolution of Honor for former governor Phillip Britt.

The board authorized a name change to “Horticulture and Cannabis” for an option in the Agribusiness degree.

Although most of the courses are the same, the name change will help students become competitive in a growing business, Provost Mike Godard said. He said they were not focusing on marijuana cannabis, but also hemp, a fiber with a minute percentage of the intoxicating drug found in cannabis.

“Providing students with this opportunity [will help] find good-paying jobs with the training and expertise. Without chemistry, students will [lack] the competitiveness in the cannabis industry,” Godard said.

“With the curriculum change, students can take classes in certain writing content areas they feel will benefit most. [Students] can move forward in their careers once they leave. It provides more flexibility for students in the curriculum,” Godard said.

The university has been investigating ways more innovation can be incorporated into curriculums. Students in AR480, 3D production for interactive media, began designing virtual realities (VR) in their classes. Many lab-based classes will incorporate VR in their curriculums to allow students to have more class engagement and create a more creative way to learn.

“Bringing the Honors program to a more central location on campus provides students with the opportunity to have a more academic building with more connections. [The new location] will be closer to the library and the University Center,” Godard said.

The Honors House will be razed, and the new facility will be open starting the fall semester.

The university is adding a four-credit police training certificate for undergraduates interested in law enforcement. Godard said students prior were able access law enforcement training through the Police Academy but would not earn college credit for the course. Now, Godard said, students can earn the Law Enforcement Certificate, qualify for financial aid and not go through their bachelor’s degree for the Police Academy.

The certificate will begin the fall semester and will be open to all students.

The Board of Governors approved the new design and material changes for Houck stadium. Vice President of Finance and Administration Brad Sheriff said there will be a hybrid material used for the student section to reduce costs.

“The hybrid material is more cost-effective and students will still have a positive experience. The new student section will still be constructed with precast concrete and aluminum seating, but the material underneath the seating will be made of steel,” Sheriff said.

At the meeting there were also two student presentations starting with public relations sophomore Emily Barkhurst, management sophomore Sheanique Syms and technology management sophomore Russell Goss. They spoke about a recent leadership forum. Barkhurst said there was a remark that stuck in her head the most.

“If you’re not trying to make an impact on others, then you’re just breathing,” Barkhurst said.

He also mentioned the awards the Arrow won this year. Gladden said he attributes the success to the students, whom he said are passionate about what they do.

"That's what I love about our students: they are not afraid to get in there,” Buck said.

She said her goal is that all Arrow staff members will have jobs when they graduate. She also announced that SEMO would host the Missouri College Media Association (MCMA) conference this year.

At the start of the meeting, seven-year board member Phillip Britt noted the end of his term, which began in 2015.

He said he saw an opportunity to give back to the university where he got his undergraduate degree, a bachelor’s degree in political science in 1992.