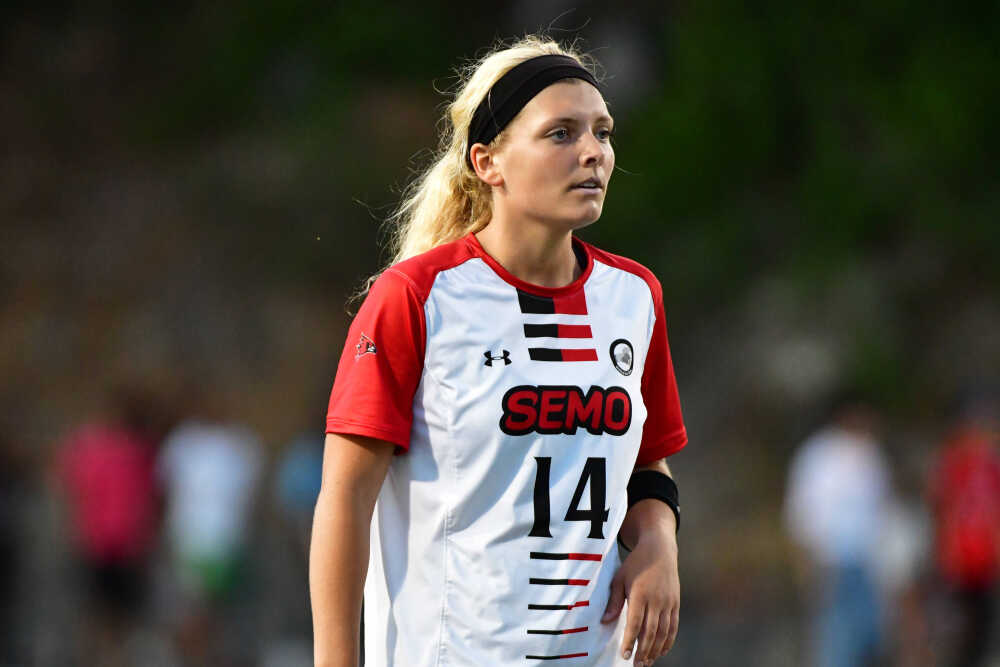 Redhawks redshirt junior Megan Heisserer stands on the field during a soccer game. Heisserer was named to the OVC Commissioner's honor roll for the 2020-21 academic year.
Photo submitted by University Marketing

Redhawks soccer redshirt junior forward Megan Heisserer has been clutch so far this 2022 season. Two game-winning goals and an assist have been from her. The team so far has a 4-4 record to start off the 2022 campaign.

Things look bright for the young forward, with her recent performance coming off an injury that sidelined her for the entirety of the 2021 season. On March 5th, 2021, Heisserer tore her ACL during the first game of the season against Jacksonville State.

“I was running and I jumped in the air to try and stop a ball and landed funny,” Heisserer said.

And just like that, her season was over. Heisserer said the road to recovery was long.

“It was really long, I did not get back in almost I think 10 months,” Heisserer said. “This past spring was when I finally got to play again, and I was still in a brace for playing for contact.”

“She’s a really great teammate,” Miller said. “I know a lot of people felt her absence because she’s a really good teammate off the field as well.”

Her absence from the team during her injury was felt during games as Head Coach Heather Nelson said Heisserer was a missing part of the team.

“She was a missing part for us because she makes a great target player for us,” Nelson said. “She was a player that would come up in big games for us.”

Now Heisserer is back on the pitch, scoring two game-winning goals as well as an assist. Her performance coming off that season-ending ACL tear has been turning some heads.

“I couldn’t be happier for her,” Nelson said. “She’s turning the corner and she looks like herself again.”

“I know that every single person is so happy for her,” Miller said. “It’s so great to see that her hard work is paying off because every day in the offseason she would get frustrated, but just continued to work super hard. So I’m just happy.”

Heisserer is excited about her recent performance coming off the ACL tear. She points out the amount of support she has received from the team following her return.

The Redhawks' next match will be Thursday, Sep. 22 as the Redhawks take on Eastern Illinois on the road in Charleston, IL.