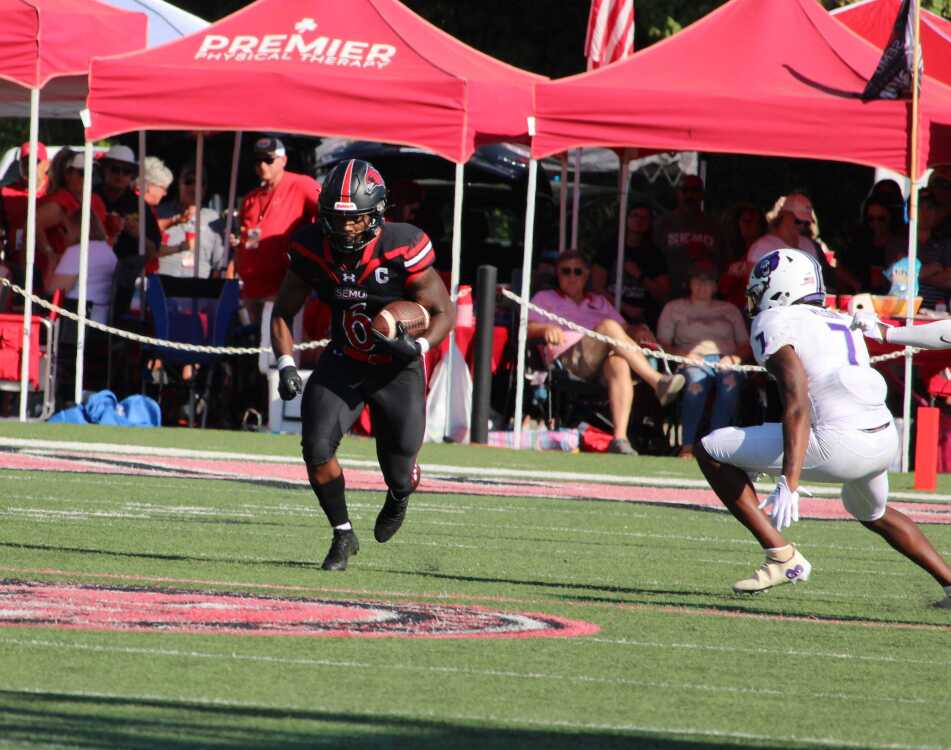 If there was one statistic that could summarize senior running back Geno Hess’s collegiate career it would be this. In his four years at Southeast, Geno Hess has never fumbled the football. Hess has been a massive piece in SEMO’s offense since his debut in 2018 and is statistically among the best running backs in the Ohio Valley Conference

The Peoria, IL native has been an anchor for the Redhawk’s offense since his arrival to the program in 2018 and has been a part of why Southeast currently sits at a 4-1 record and is ranked #25 according to the latest FCS coach’s poll.

As head coach Tom Matukewicz put it, Hess is “a dog.” Coach Tuke also said aside from his dog-like work ethic, Hess has a mind for leadership on and off the field.

“He's done a great job of learning how to lead and stepping up in those moments and leading,” Matukewicz said. “He just gives you that important piece to be able to have balance between running and passing. We've been able to throw it well but we have to be able to run it.”

Last season, Hess led the OVC in touchdowns, scoring and yards per game. He might not be seeing the same volume as last season but with the emergence of sophomore quarterback Paxton DeLaurent and a reliable receiving core, he remains a crucial part of SEMO’s offense.

Matukewicz said Geno’s presence in the backfield has taken some of the pressure off the young quarterback.

“Paxton doesn’t necessarily have to go win us a game,” Mactukewicz said. “As we get going, there might be a game that he has to, but he shouldn’t feel that stress to have all that pressure on his shoulders.”

SEMO has seen great success playing at home in recent seasons. They currently own an 18-game winning streak at Houck stadium and have taken the mantra of “we don’t lose at Houck” to heart.

“Being able to defend the home territory in front of your home people it's just a great feeling knowing that we don't lose at home,” Hess said.

Hess also mentioned the importance of the Southeast coaching staff, specifically coach Tuke to his development as a player and as a young man.

“He's showing me things that don't carry on for life after football and always be grateful for that,” Hess said. “Just how to go about your day to day, how to handle things and how to respect people.”

Running backs coach Luke Berblinger said watching Hess’s development during his time at Southeast has been something special.

“He has gotten the recognition he deserves but it's been cool to see his growth for the past three years since I've been here. Especially since I became the running backs coach just to be working with him and to see his growth within the program,” Berblinger said.

Geno Hess and the Redhawks will look to continue their early success in their matchup against Tennessee Tech at 2 p.m. on Saturday, Oct. 8 at Houck Field.