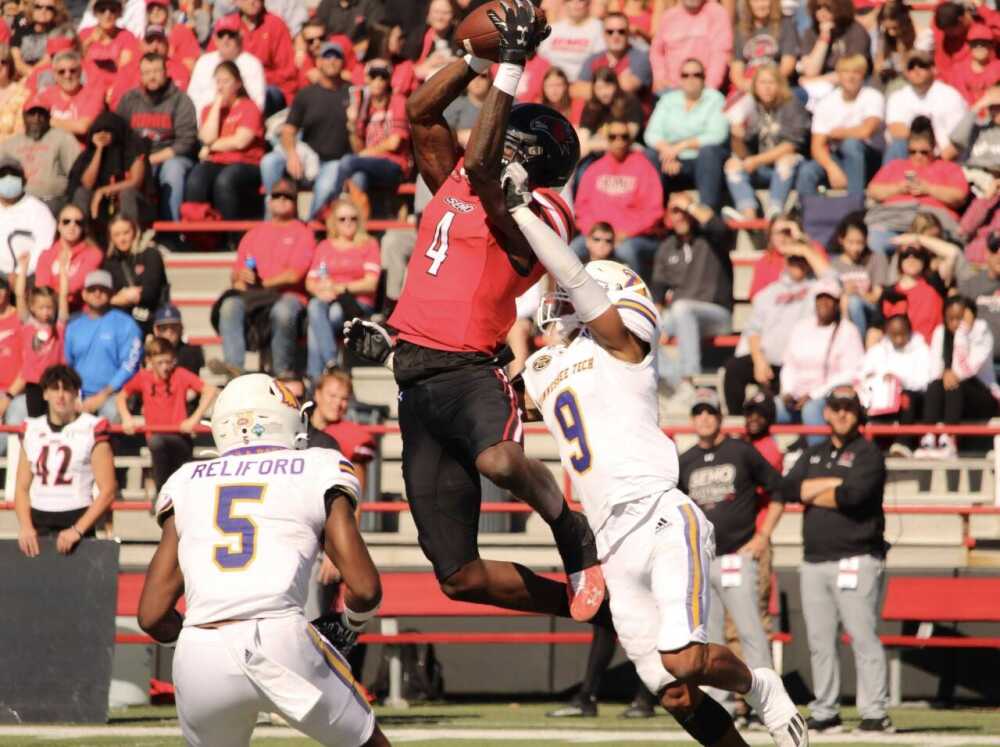 The Redhawks’ win streak is now extended to five consecutive wins, and they have a 3-0 record at home.

“I think we finished the game out well,” head coach Tom Matukewicz said. “We didn’t turn it over and defense got a couple good takeaways. It was a nice job by them.”

Sophomore quarterback Paxton DeLaurent led the Redhawks as he completed 22 of 33 passes and threw for 266 yards and three touchdowns. Senior running back Geno Hess scored the first touchdown of the game on a two-yard run in the first quarter. Two of DeLaurent’s three touchdowns were to junior receiver Ryan Flournoy.

Flournoy finished the game with a total of 101 yards on five receptions, and two touchdown passes from DeLaurent. Flournoy also averaged 20.8 yards per catch.

“It was a team effort,” Flournoy said. “Paxton [DeLaurent] gave me the ball and I just did what I had to do.”

Senior receiver Johnny King was the other receiver to complete DeLaurent’s trio of touchdowns. The two connected on a 7-yard pass to put the Redhawks up 27-13 at the end of the second quarter. King finished the contest with 51 yards on five receptions, with an average of 10.2 yards per catch.

The Redhawks defense was able to hold its own in the contest. Sophomore inside linebacker Bryce Norman led the defense with 12 total tackles. Senior defensive back Lawrence Johnson was the second-highest leading tackler with 10 total.

Johnson along with other senior defensive backs Trai Hodges and William McCall added one interception each. Hodges had the most yards on his catch with 49.

Coach Tuke said he was disappointed in his team’s penalties and plans to fix that soon, as that could possibly cost them the next game.

The Redhawks will have a bye week for the week of Oct. 14. They will be back in action on Oct. 22 when they travel to Natchitoches, Louisiana to battle Northwestern State University.