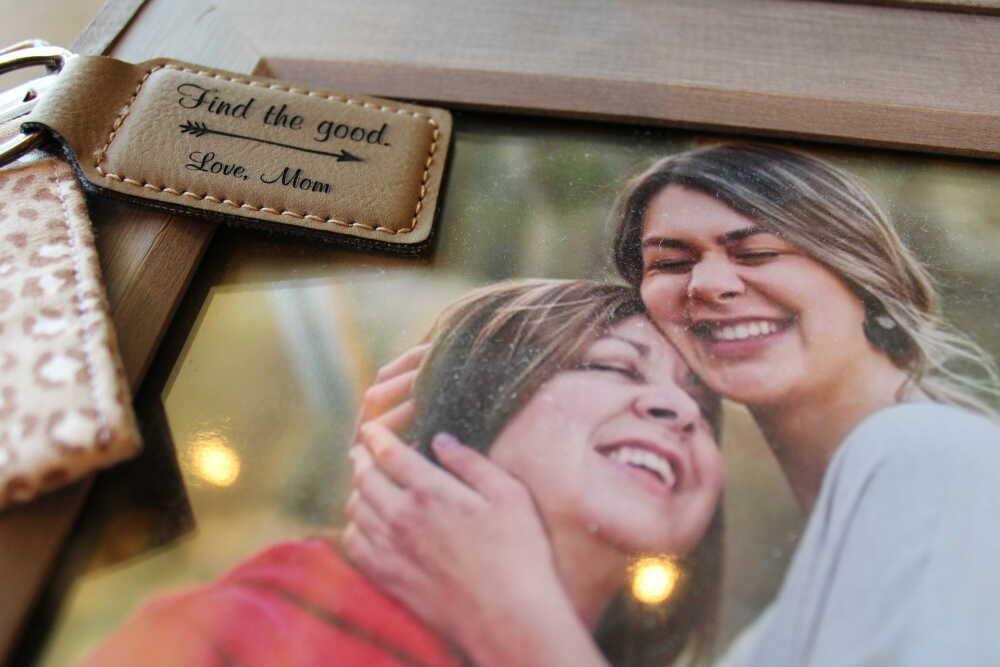 Amy Case-Altenthal and her daughter, Teghan Altenthal, find a moment of happiness. Teghan said she has reminders of her mom with her every day.
Photo by April Styer

When Amy Case-Altenthal was first diagnosed with breast cancer, she quickly found a quote to keep her motivated on the hard chemo/radiation days: “Every day may not be good, but there is good in every day- Find the good!”

SEMO special education alumni Amy Case-Altenthal’s cancer was found when she noticed an irritation along the left side of her breast. She had just had a hysterectomy and thought it was a side effect from the hormones.

Teghan Altenthal, Amy’s Case-Altenthal daughter, recalls the day her mom got the call from the doctor giving her the news.

“My mom was diagnosed on July 15, 2021, the day after her 43rd birthday,” Teghan Altenthal said. “She was complaining about a soreness on the left side, and she thought the skin looked inflamed.”

Amy Case-Altenthal family history had breast cancer on both of her grandparents’ sides, so she routinely went for mammograms each year. She had a mammogram the year before, but after a physical exam from her doctor, the medical staff decided to move her mammogram up early to see if there were any changes.

Being aware about Breast Cancer

October is Breast Cancer Awareness month, and being proactive in breast health and care can help with early detection.

The American Cancer Society estimates approximately 287,850 new cases of invasive breast cancer will be diagnosed in women in 2022, which means one in every eight women will develop breast cancer. Those rates keep increasing year after year.

The Southeast Cancer Center in Cape Girardeau says a majority of their breast cancer patients find lumps or spots themselves during their own routine self-breast exams at home.

Southeast Cancer Center registered nurse and SEMO alumni Beth Altenthal, who was Amy Case-Altenthal’s mother-in-law, found a spot on her breast and knew immediately she had breast cancer.

“I was getting ready for church, and I remember looking down, thinking something didn’t look right,” Beth Altenthal said. “It was just obvious to me that it was cancer.”

Beth Altenthal contacted her doctor, got a biopsy and started chemotherapy right away. She decided at the time to try chemo first to shrink the tumor and then have surgery to remove the lump.

For Amy Case-Altenthal, the biopsy results confirmed what the doctors had suspected: She was diagnosed with aggressive inflammatory stage three breast cancer.

Amy Case-Altenthal’s cancer team decided to fight the aggressive cancer with an equally aggressive treatment called “The Red Devil.” The Consumer Health Organization reported doxorubicin, “The Red Devil,” is one of the most powerful chemotherapy drugs invented. It can kill cancer cells at every point, but unfortunately, the drug can also kill heart cells. While receiving doxorubicin, Amy Case-Altenthal lost her hair, eyelashes and eyebrows.

Beth Altenthal said her cancer will usually be connected to ovarian cancer due to the level of hormones in the body. After getting a complete body scan, doctors found she also had tumors on her ovaries.

Being employed with the Southeast Cancer Center, Beth Altenthal said she sees firsthand the misinformation about breast cancer.

“Hearing you have breast cancer doesn’t mean a death sentence. We have come a long way in treatment and resources,” Beth Altenthal said. “People are living longer, beating cancer and living a healthy, productive life.”

One myth she said she often hears is patients won’t be the same after getting diagnosed with breast cancer.

“Cancer doesn’t take away who you are. People think even if they beat cancer, they will be changed somehow,” Beth Altenthal said. “And that’s just simply not the case. It just becomes a part of who you are.”

Beth Altenthal beat her cancer in 2013 at the age of 44 after her diagnosis in 2011. Now, she gets mammograms every year and sees her oncologist every six months. She has been cancer-free for almost 10 years. Even though it was scary to go through at the time, she said she wouldn’t change a thing.

“It was one of the most beautiful journeys I could go through. It opened my eyes to appreciate every morning waking up and giving it all I got.”

A hard battle with cancer

Even though Amy Case-Altenthal fought her cancer with the best chemo and radiation treatments and opted for a complete mastectomy, her cancer had spread to her lungs and into her trachea. Amy Case-Altenthal’s breast cancer was harder to fight since it was not hormone-fed.

In the summer of 2022, Amy Case-Altenthal had a positron emission tomography (PET) scan, which is an image of the patient’s cancer that helps the doctors monitor the cancer’s aggression. The scan showed the cancer had spread, and doctors told her she now had stage four breast cancer, even though the cancer was in her chest wall.

Teghan Altenthal said her mom took a turn when she developed pneumonia along with the cancer in her lungs. She was admitted into the hospital and had to be put on oxygen.

“My aunt Heather noticed my mom’s color was off and took her to the emergency room,” Teghan Altenthal said. “They drained a lot of fluid off my mom’s lungs and put her on oxygen.”

Up to this point, many doctors from St. Louis and Cape Girardeau gave Amy Case-Altenthal everything they could to help fight the aggressiveness of her cancer, but the cancer spread faster than they could treat it.

“My mom was always a fighter, even when the news was bad about her cancer. She still smiled, made us laugh and wanted to make sure we were OK,” Teghan Altenthal said. “When she was put on oxygen, she still gave us the thumbs up, but we knew she was growing tired.”

Despite the doctors and staff at Saint Francis Medical Center’s best efforts, Amy Case-Altenthal lost her battle to breast cancer Aug. 28, 2022, a little more than a year after being diagnosed.

Both Amy Case-Altenthal and Beth Altenthal contribute home self-breast exams to detecting their cancer early. Their advice to others is if something seems off, don’t wait to see what happens; get in to the doctor to get it checked.

“As a cancer navigator here at Southeast Cancer Center, I tell women to check their breasts a week before their periods or wait a week after it is over, because your breasts are tender and sore during your cycle,” Beth Altenthal said. “Get a genetics test to see if you have the mutation that causes breast cancer.”

For Teghan Altenthal, her mom’s breast cancer battle inspired her to get involved in a medical spa where she works with cancer patients.

“After seeing my mom go through cancer and what it did to her body and her mind, I want to make them feel beautiful,” Teghan Altenthal said. “Especially when they have lost their hair, and their skin goes through changes. Every cancer patient deserves to feel beautiful.”

Monthly breast exams at home are crucial for early detection and effective breast care. For information on how to give a self-breast exam, visit Nationalbreastcancer.org for step-by-step instructions.