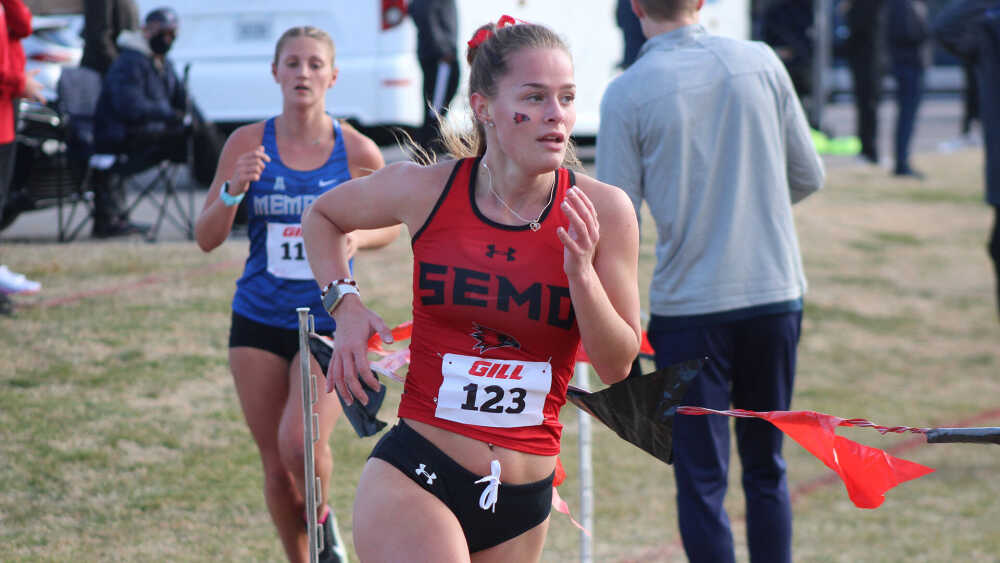 SEMO senior cross country runner, Hannah Eastman has started the season with impressive results but the best could be yet to come.

Eastman came to SEMO and had a promising freshman year, competing in all six races during the season. This included a top 20 finish in the Bradley Intercollegiate three-mile race. Unfortunately a torn ACL during her sophomore year put her on the shelf temporarily.

After missing all of last season recovering from injury, Eastman has posted back to back personal record times in the 5k race at the McKendree Bearcat XC Classic and the Live In Lou Classic. The Live In Lou Classic saw Eastman finish with a time of 18:28:01 which was 31 seconds less than her previous personal record. Head Coach Ryan Lane said Eastman’s performances will only go up from here.

“She’s going to do it again next week. We still haven’t opened up running as hard as we can with her coming off of reconstructive knee surgery in 2021. With cross country being a little less stable we’ve been pretty cautious, and so with that being the case the first time we’re really going to go and try to run personal bests is next week,” Lane said.

Eastman detailed the process of recovery she went through while also saying that her body is still on its way to getting back to 100%.

“I had to do PT for a good hour every day and really push through. I had to rebuild the muscles in my leg and even today, they’re still not completely even,” Eastman said.

Eastman running with no restrictions should be a scary sight since those personal records include a 1st place finish at the McKendree Bearcat XC Classic. For her efforts she was awarded the OVC runner of the week on Sept. 27. Senior runner Katie Wegmann said she was happy to see Eastman’s hard work pay off and get rewarded.

“Hannah and I’ve been running together since our freshman year and just watching her overcome her ACL tear has been amazing to watch,” Wegmann said.

Coach Lane said Eastman’s success with her limitations is a test to her work ethic.

“It’s happened organically. She’s just in such good shape and it’s just her own personal work ethic. A lot of people after having a catastrophic injury like that would have quit and given up instead she’s the best she’s ever been,” Lane said.

Looking forward, SEMO will compete in the Bradley Pink Classic on October 14th. The event will be the final test for the Redhawks before they prepare for the OVC championship on Oct. 29. Eastman said she and the team are hitting their stride at the right time.

“I think I, as well as the rest of the team, have been improving race by race, which is exactly how you want the season to go. We’ve got conference in less than a month, and I can only imagine how much better we’re gonna be,” Eastman said.

The Redhawks are hoping to improve on their performance in last year's OVC championship where the women finished 4th out of 12 and the men finished 7th out of 11.