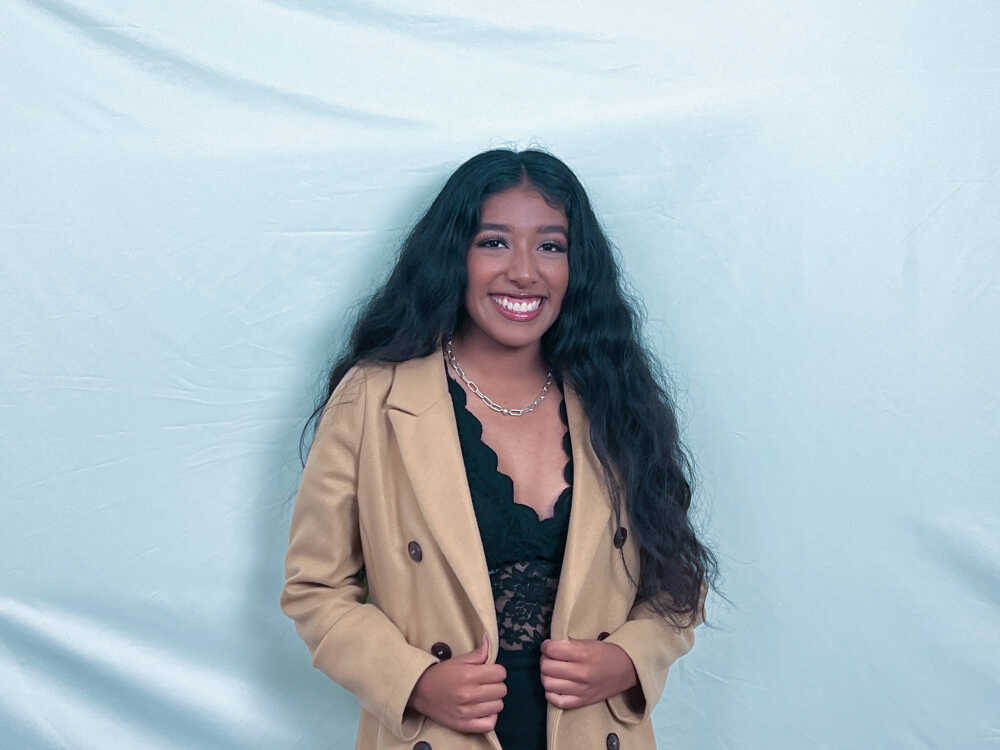 Sophomore early childhood education major Jaymara Madrigal said her parents spent $5,000 for her quinceańera. She said the quinceańera is a coming of age tradition in Mexican culture where for your fifteenth birthday, there is a large celebration for the passage from girlhood to womanhood. Some parents begin saving for their daughter's quinceańera from very early ages, she said.
Photo by Molly Phegley

The theme of this year’s Hispanic Heritage Month, which began Sept. 15 and ends Oct. 15, is “Unidos: Inclusivity for a Strong Nation.” Unidos translates from Spanish to English means “united.”

As stated by a press release from the National Council of Hispanic Employment Program Managers, the concept of being united “reinforces the need to ensure diverse voices and perspectives are welcomed in decision-making processes, thereby helping to build stronger communities and a stronger nation.” Part of that reinforcement requires inclusivity.

As defined by Oxford Languages, inclusivity means “the practice or policy of providing equal access to opportunities and resources for people who might otherwise be excluded or marginalized, such as those having physical or mental disabilities or belonging to other minority groups.”

One part of providing inclusive opportunities to Hispanic individuals includes providing the same platform as the ethnic majority for their voices to be heard and stories to be told.

Senior Spanish and global studies major Emily Lopez was born in St. Louis after her parents immigrated to the U.S. from the city of Guadalajara in Jalisco, Mexico, with her older siblings.

Lopez said she sees her family shying away from celebrating their Hispanic culture and holidays to avoid attention from critical Americans. She said this makes her sad because she feels like she is not learning about her culture, but she understands it is a survival mechanism her parents had to adopt.

“There is definitely a lot of racism that not only my family has experienced, but so have I,” Lopez said. “It’s never fun, and we don’t want to have to deal with it, but we do. We kind of just normalized it, because we know it’s bound to happen.”

Lopez said her family lived in a state of anxiety for much of her early childhood while her parents were in the process of gaining their U.S. citizenship. She said she would worry for her parents, who were afraid to leave their house because of the chance of facing racism or being targeted by police.

Lopez connects with her culture through music that reflects her and her family's experience. Her current favorite band is Los Tigres del Norte because she likes their storytelling about memories in Mexico and living as a Mexican in the U.S. Her favorite song is “La Jaula del Oro,” which translates to “The Cage of Gold.”

“You’re living in all this American culture, and it’s all great, and you’re making more money, so you would say it’s all gold,” Lopez said about the meaning of the song. “But you’re still living in a cage, because you're scared to go outside.”

Lopez isn’t the only one who shares this experience. Senior biology major Adriana Sanchez said her uncle immigrated to the U.S. from Toluca, Mexico, and often moved around to work in the fields before helping her parents follow in his footsteps.

Sanchez said once, while her uncle was working for some farmers in Georgia, he was kidnapped and enslaved. She said the farmers kept any documentation he had and held him at gunpoint, forcing him to stay and work for them.

“It’s something that’s real, and it’s possible,” Sanchez said. “If someone doesn’t know the language or how to communicate or how to get help, they don’t even know there is help. They can get into situations where they don’t know how to leave.”

Even though there are dangers to embracing Hispanic culture and being an immigrant in the U.S., sophomore early childhood education major Jaymara Madrigal said she has a lot of pride about who she is and where she comes from.

Madrigal’s mother is from Tamaulipas, Mexico, and her father is from Campeche, Mexico. After immigrating to the U.S., they moved around for many years to find work before Madrigal was born in North Carolina. Her family eventually settled in Missouri to work in agriculture.

Madrigal attended Holcomb High School in Holcomb, Mo., and graduated in the top four in her class of 34 students. Living in a small town and being a minority, Madrigal said she wanted to demonstrate her cultural pride to her parents. While walking across the stage of her graduation, Madrigal wore a Mexican flag on her back and was greeted with not-so-happy faces from the administration.

“I just wanted to show people I was proud of being Mexican and to show my parents I’m grateful for them, my culture, and everything they’ve done for me,” Madrigal said.

Junior political science and Spanish major Martha Lejarazu said she is proud of the emphasis on familial bonds and hard work ingrained in her Mexican culture.

Lejarazu’s parents immigrated from Rio Bravo, Mexico to the U.S. before she was born in Texas, and although her dad worked many odd jobs while her mom stayed with the family, they often struggled with money.

“I’ve never seen a Mexican that is not hardworking,” Lejarazu said. “Life in Mexico is so unfair, and all we want is a chance at fairness, and we will do anything for that.”

Lejarazu is majoring in Spanish, because growing up, she was only able to learn Spanish by speaking it with her family, but was not taught to read or write it. She said she wants to pass down as much of her culture to her children as possible, and she does this by cooking traditional Mexican foods and teaching them words in Spanish.

Lopez, Sanchez, Madrigal and Lejarazu agree the Hispanic representation on campus and in Cape Girardeau is lacking.

Lopez said she knows there are Hispanic people in the area, but she doesn’t see many of them. She said she wishes there were more opportunities for them to be able to meet and practice Hispanic traditions.

“We do stuff on campus when it’s Hispanic Heritage Month, but that’s not the only time we’re important,” Lopez said. “We can talk about Hispanics all year long; it doesn’t have to be a certain month.”

Lejarazu said she thinks the Student Organization of Latinos will help bring more representation of and education about Hispanic culture to campus as they expand the group and hold more events.

Education is one of the best ways to appreciate and respect a different culture. Hispanic Heritage Month aims to educate the public on ways to support and represent Hispanic people who may not have the same opportunities for personal and cultural representation.

To learn more about Hispanic Heritage Month, visit hispanicheritagemonth.gov or join SEMO’s Student Organization of Latinos (SOL) which also serves as a Spanish club for non-Latino individuals. SOL will hold a Food Truck Thursday event for the last day of Hispanic Heritage Month Oct. 15 from 11:30 a.m. to 12:30 p.m. on the median between Academic Hall and Kent Library.