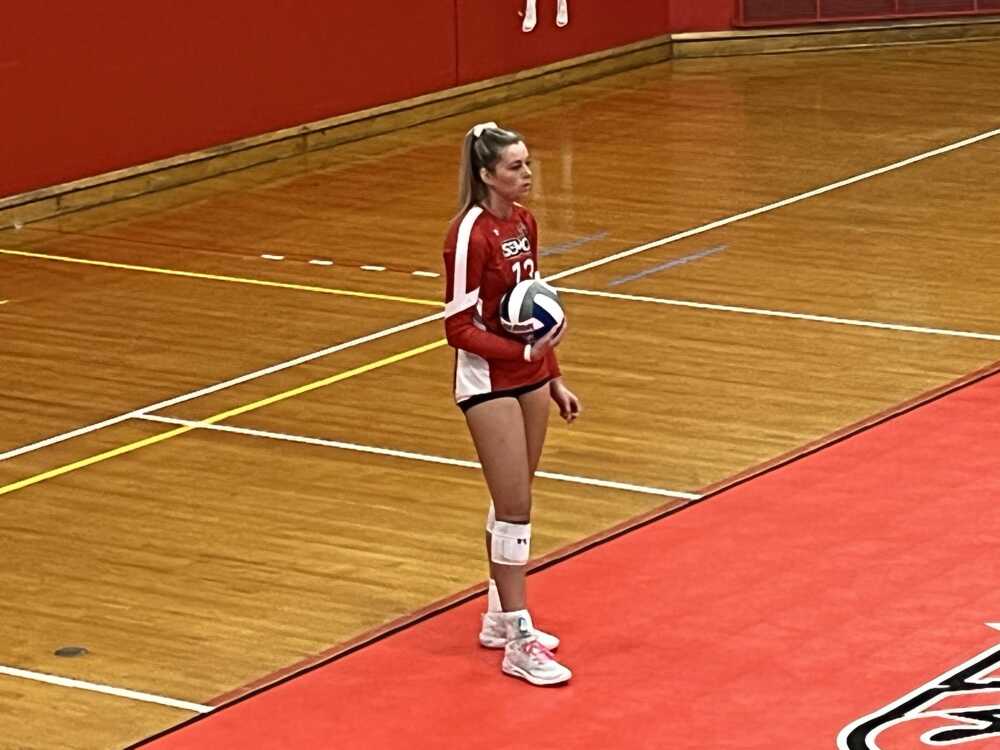 Junior outside hitter Kayla Closset before serving the ball during a game against Tennessee Tech on Oct. 22.
Photo by Jeffery Long

Game one took place on Friday, Oct. 21. Both teams were close to each other in the points as they would never be further than six points separating the teams during the game. The Redhawks would take the first set 25-20.

The tight game would continue however it would be Tennessee Tech that would take the upper-hand. As they would win the remaining sets to win the first game of the weekend series to a score of 3-1. The Redhawks would end the night with 45 kills and 12 blocks, along with 8 aces.

Game two took place on the Oct. 22, and the game went to an offensive start for Tennessee Tech as they would take the first set 25-18. The Redhawks would respond with a defensive second set and would tie the game 1-1.

The Redhawks would keep up their defense as they would continue producing blocks to keep the ball in play and gain some points. But soon Tennessee Tech would begin to come back and overpower the Redhawks' defense and take the remaining sets, winning the game and series with a final score of 3-1.

Tennessee Tech never dragged too far behind the Redhawks and would allow them to stay in the game and even complete comebacks. Senior setter Izzy Lukens talked about that as a takeaway from the game.

“We can’t let up,” Lukens said. “When we’re leading by a lot, we can’t let up. We have to keep pushing. Keep pressing the gas pedal as we say. Don’t ever be comfortable.”

The Redhawks have been on a losing streak heading out of the weekend series, losing three of their last six games, the three losses being in a row. However, graduate right-side hitter Colby Greene noticed how the team managed to play well despite the result.

“I think we did a better job playing together than what we have in the past,” Greene said. “We are starting to put things together, which is a good thing.”

Tennessee Tech has been a tough team to play this season for the Redhawks. Head coach Julie Yankus commented on how the team rose to the challenge during this weekend series.

“You know Tennessee Tech is a very good team. I’m really proud of how we rose to the occasion to play them.” Yankus said. “We really did have some great moments tonight and last night as well. We just need to find a way to put it all together for three full sets.”

The Redhawks will travel to St. Charles, Missouri to take on the Lindenwood Lions in a two-game series starting Thursday, Oct. 27 at 6 p.m.