U.S. expecting rapid decline in Christianity over next 50 years according to a recent report by Pew Research Center 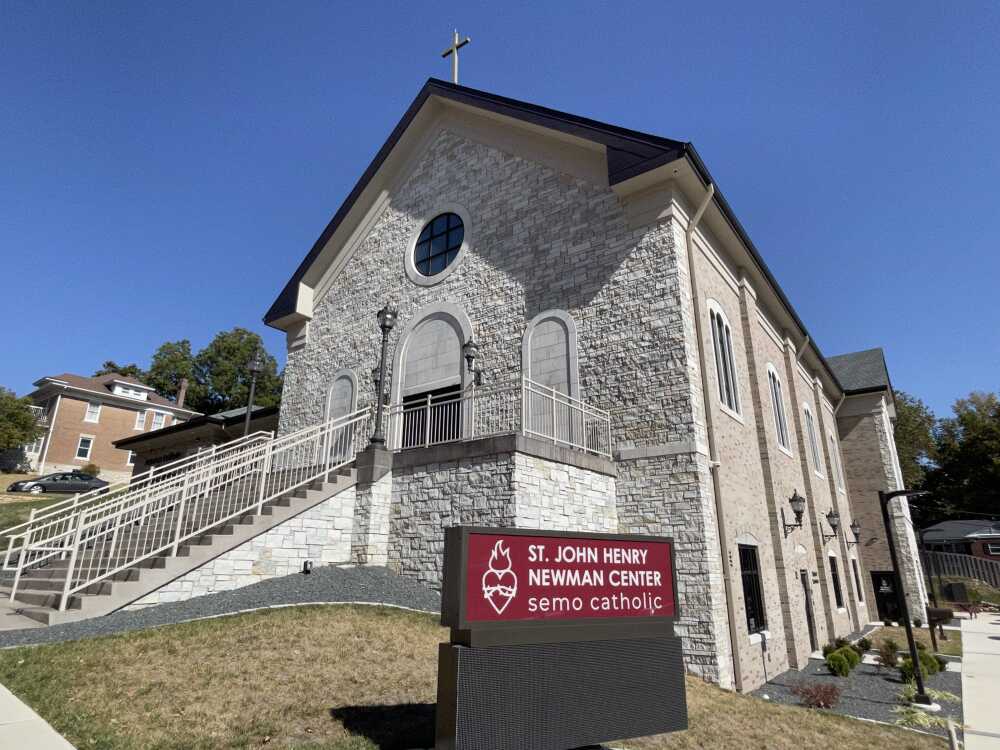 St. John Henry Newman Center Catholic Church was built on SEMO's campus in 2020. The Newman Center holds Catholic mass at noon on Tuesday, Wednesday and Thursday, and at 5:15 PM on Monday and Thursday. Students can attend bible study with other students to discuss their faith.
Photo by Kyrie Padberg

Part one of a three part series analyzing the results of a recently released Pew Research Center poll on Christianity in America and its relevance to Southeast Missouri State University and the Cape Girardeau region.

From an outsider’s perspective, it may seem Christianity is thriving at SEMO with the new development of a Catholic church on campus.

The Director of Evangelization and Outreach at the Newman Center, Phil Klaas, grew up in a Catholic family and went through six years at the seminary, a school for priests, ministers or rabbis to learn about scripture and theology.

Klaas’ wife, Mallory Klaas, also grew up in a Catholic family and is a leader for women at the Newman Center. Both Phil and Mallory Klaas said they would have found Christianity without growing up in Christian household, and have a hard time picturing their life without God. Mallory Klass thinks she would have been presented with Christianity eventually because of who God is and who he says he is.

To reach more people, The Newman Center holds a daily Mass for members of the church to pray and for students to come and discover Jesus. A $1 meal is offered every Sunday after Mass as an opportunity for students to join and discuss their faith with peers. Klaas said the Center’s involvement with the SEMO campus also includes spending time with the student leaders of the church, where they talk about love for God and love for people.

“Especially in the Catholic Church, we aren’t saying anything new [during Mass], but what is new is about how we are communicating our faith to people,” Mallory Klaas said.

Christianity by the numbers

While the Newman Center tries to promote their religious message to the public, Pew Research Center poll shows a predicted decline of the belief in Christianity.

“People who have left Christianity are underrepresented in the South, where 33% of former Christians live, compared with 42% of people who have remained Christian and 38% of U.S. adults overall,” the Pew Research stated.

Out of all 50 states, Missouri is ranked the 15th most religious state, with 60% of adults identifying as “highly religious” in 2016. Missouri stays close in rankings when determined if they were “highly religious” by attending worship weekly (37%), praying every day (59%), belief in God (70%) and who say religion is important in their lives (56%).

The study, “Modeling the Future of Religion in America,” created several example scenarios, including switching, non-switching and rising disaffiliation with and without limits.

In the report of ‘Modeling the Future of Religion in America,’ the steady switching scenario shows how if current trends of movement into and out of Christianity were to continue, the percentage of American Christians between the ages of 15 and 29 are projected to drop to 46% of the total population in the next 50 years, the Pew Research Center stated. The study shows each year, 31% of Christians become religiously unaffiliated before they turn 30, and 21% of unaffiliated people become Christian before turning 30.

Religious disaffiliation is the act of “leaving the religious tradition in which one was raised for no religious affiliation in adulthood,” according to an article by Social Science Research. Rising Disaffiliation with limits means there has been a growing number of adults switch out of Christianity before they turn 30, while a share of “nones” switch in. When the rate is being limited, it prevents the share of Christians who leave the faith from rising about 50%, according to Pew Research Center. There isn’t a cap when dealing with rising disaffiliation without limits.

Generational differences in Christianity at SEMO

A number of Americans above the age of 40 have rejoined Christianity. Retired philosophy of religion professor Dennis Holt was raised in the Presbyterian Church but did not belong to a church for most of his adult life, keeping a skeptical distance from religious belief. Recently, though, he has joined a Presbyterian church. It is comforting, he says, to attend services and share fellowship with other members of the congregation.

“If you go through the generations, the silent, millennial, Generation X and Z, that [unaffiliated percentage] number increases in every generation,” Holt said. “The evidence is that once people settle into a point of view with respect to religion, they usually don’t change [their mind] over time, even though some people do.”

While others have found their way back to Christinaity, some have decided they won’t be returning. Junior PR major Adam Nicholson’s father is a pastor, and Nicholson no longer affiliates with the Southern Baptist church he was born into. Nicholson said he went to church every Sunday morning and Wednesday night until the end of high school, and now considers himself spiritual, but not religious.

Nicholson said his close experience with the church was a large part of what turned him away from it. The lack of community participation and interest in faith outside of the Sunday sermons drove Nicholson away.

“I saw a lot of things that go on behind the scenes,” Nicholson said. “I wasn’t super into it after seeing how people treated each other outside of the church. I think a lot of people who are leaving the church now are taking a more spiritual attempt towards life more than a biblical attempt.”

However, many SEMO students have stuck with their faith and made it their own. Junior computer information systems major Landon Brown was raised in the Roman Catholic Church and has attended the SEMO Catholic Newman Center since he started at the university. Brown was homeschooled, which he said allowed his mom to incorporate faith into his daily life.

“My parents did a good job of raising me in the Catholic faith — getting me good catechesis to where I understood the objective truth of Catholicism,” Brown said.

Catechesis is religious education given to a person after they have been baptized in a Christian church.

People who are still religious and holding onto their faith are hoping to help others find faith before the unaffiliated minority becomes a reality. For the full research project, visit Pew Research Center.