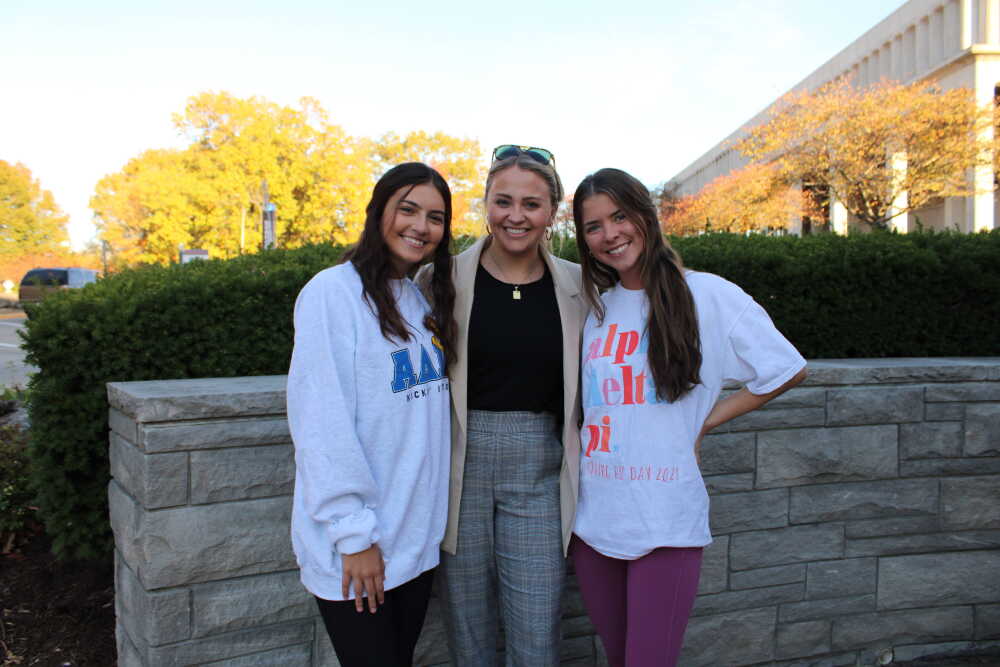 Alexia Deluce and Kelsey Steele are with Caroline Rahna the ADPI recruitment chair. Deluca and Steele are best friends that became sister during 2022 fall recruitment.
Photo by Kate Haussman

For some, a best friend can be comparable to having a sister or a brother, but for two girls, friendship really did turn into being siblings. Freshman nursing major Alexa Deluca and freshman business administration major Kelsey Steele are lucky enough to be both best friends and sisters thanks to this year’s Alpha Delta Pi (ADPI) fall recruitment.

Deluca and Steele knew of each other in high school but did not become friends until their senior year at Jackson High School.

After graduation, Deluca and Steele decided to attend SEMO without knowing each other had already chosen to attend.

Both women have friends and relatives who were in ADPI, making the choice easy for them by the time recruitment came along.

Recruitment is a series of events held by sororities and fraternities for incoming freshmen and students interested in getting involved with Greek Life. It allows the organizations to get to know students to see if they are a good fit for the organization.

At the end of the week, each sorority and fraternity has a “bid bay,” a celebration where students find out which organization they got accepted into. ADPI accepted both Deluca and Steele, and they became sisters.

“We both were hoping that we’d end up in the same [sorority], but we were making sure to keep an open mind and we really had no idea what was gonna happen until bid day,” Deluca said.

Being sorority sisters is a special connection because these relationships last through college, and even a lifetime. Deluca and Steele said they are so excited to spend their college years as best friends and sisters.

Senior health communications major Caroline Rehna is ADPI’s vice president of marketing and the head of fall 2022 recruitment. Rehna knew Deluca and Steele before they joined the sorority.

“I’m just really excited to watch [Deluca and Steele] grow, and once I graduate, just coming back to see the girls that are freshmen now grow throughout the year,” Rehna said.

ADPI and other Greek life organizations have been working for the last couple weeks to prepare for SEMO’s homecoming parade. Deluca and Steele said they have spent around four weeks working on parade floats.

The girls were also involved in ADPI’s Spirit Rally earlier this week, where they became closer to their new sisters, and look forward to building stronger connections with the rest of their sorority sisters throughout their time in college.