The importance of young voters at SEMO 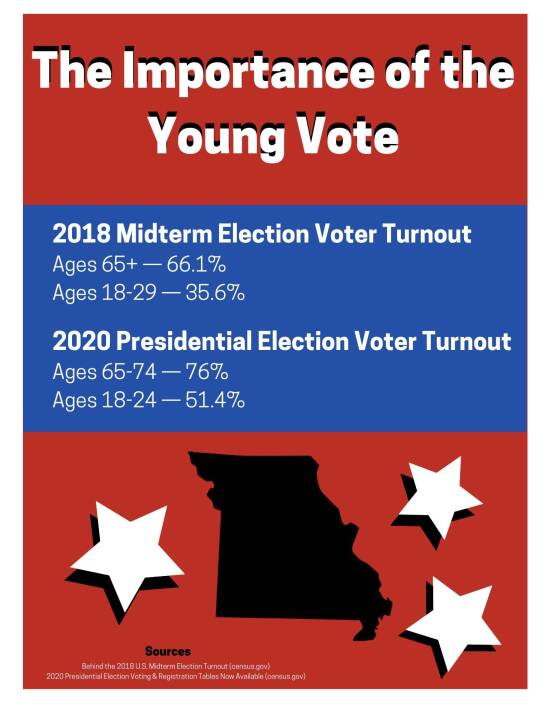 To make an impact on their community and on important issues, citizens vote. However, young people, including SEMO students, are voting less than the older generations.

The midterm election is on Nov. 8 and early voting started on Oct. 25 in Missouri. Issues such as investing in municipal securities, the legalization of marijuana, increasing police departments funding, the Missouri National Guard becoming its own department, and revising or amending the Missouri Constitution are on the ballot.

Professor of political science Jeremy Walling said citizens are responsible to elect representatives to maintain democratic values at the national and smaller scale.

“There's not much focus on local and state elections,” Walling said. “Your vote is even more valuable in a midterm election year because it's not washed away in the millions of people that vote for president.”

Freshman secondary education major Drew Bergfeld said he stays politically engaged by listening to the news and voting to express his opinions at the polling booth.

“If you want something to change in the government, it's your civic duty to vote,” Bergfeld said.

Associate professor of political science Jason Sides said voting is important because it allows each person’s voice to be heard and impact the trajectory of their government.

Compared to older generations, the turnout of young voters is significantly lower. The U.S. Census stated in the 2018 midterm elections, voter turnout for ages 65+ was 66.1% while ages 18 to 29 had a 35.6% voter turnout.

Sides said Americans are at a transitional point in history since the United States is facing more competition economically, politically and militarily. He said the young vote matters because these are the people who will be affected by these issues in the future.

“The baby boomers are getting older and passing on,” Sides said. “Gen Z is going to have to live with the consequences of how we approach some of these issues. I think Gen Z [owes] it to themselves to make sure these consequences fall out in the way they want to live with.”

Walling said since younger people generally have more free time, using that time to stay informed from a young age is important. He said knowing when elections occur and understanding issues on the ballot will allow politics to not be a surprise as younger people grow older.

“I think it's important because it's a way our voices can matter,” Dunlap said. “I think just standing on the sides and not doing anything is not going to help anybody.”

For more information on voting in Missouri, visit the government’s website.