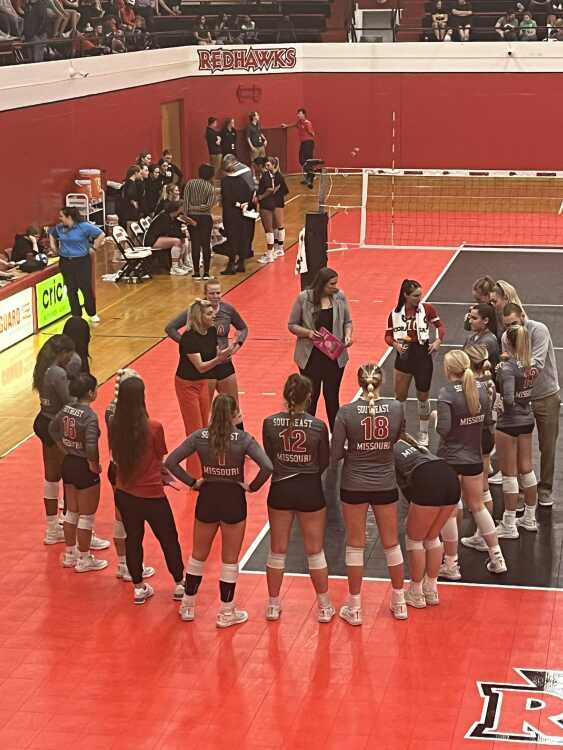 SEMO head coach Julie Yankus talks to her team during Friday's match against the SIUE Cougars.
Photo by Mark Grogan.

The SEMO women’s volleyball team swept the weekend series against their division rival SIUE Cougars on Friday and Saturday by scores of three sets to one at the Show-Me-Center, using a solid team defense and a strong serving to overpower the Cougars.

The first set was dominated by the serve, with both teams producing long scoring runs. The Cougars went on a 6-0 run late in the set and finished off SEMO by a score of 27-25.

The Redhawks struggled to finish points in the second set, trailing by as much as seven before junior setter Izzy Lukens went on an eight-point serving run to power SEMO to a 25-22 set win.

“Honestly my goal was to get it over and in,” Lukens said. “I knew my team was going to put it in play you know your team is going to handle whatever comes your way.”

SEMO played with renewed confidence in sets three and four, beating the Cougars by scores of 25-20 and 25-23.

Senior setter Tara Beilsmith continued to stand out, leading the team in digs with 24 while notching 10 assists.

“A big thing for me is expecting the unexpected,” Beilsmith said. “Yes, I study their tendencies, but also I'm going to be ready for anything that they can throw at me.”

Redhawks Coach Julie Yankus said the win against a conference opponent with a similar record bodes well for her squad's confidence.

“I think it's a big step for us because we've had so many different people contributing that we know that no matter what lineup we put out, or who's going to show up that day we can get the job done,” Yankus said.

SEMO carried their momentum into Saturday's tilt, once again beating the Cougars three sets to one.

The Redhawk’s next and final weekend series before the Ohio Valley Conference tournament will be at 6 p.m. on Friday, Nov. 11 when they take on the Morehead State Eagles in Morehead, KY.