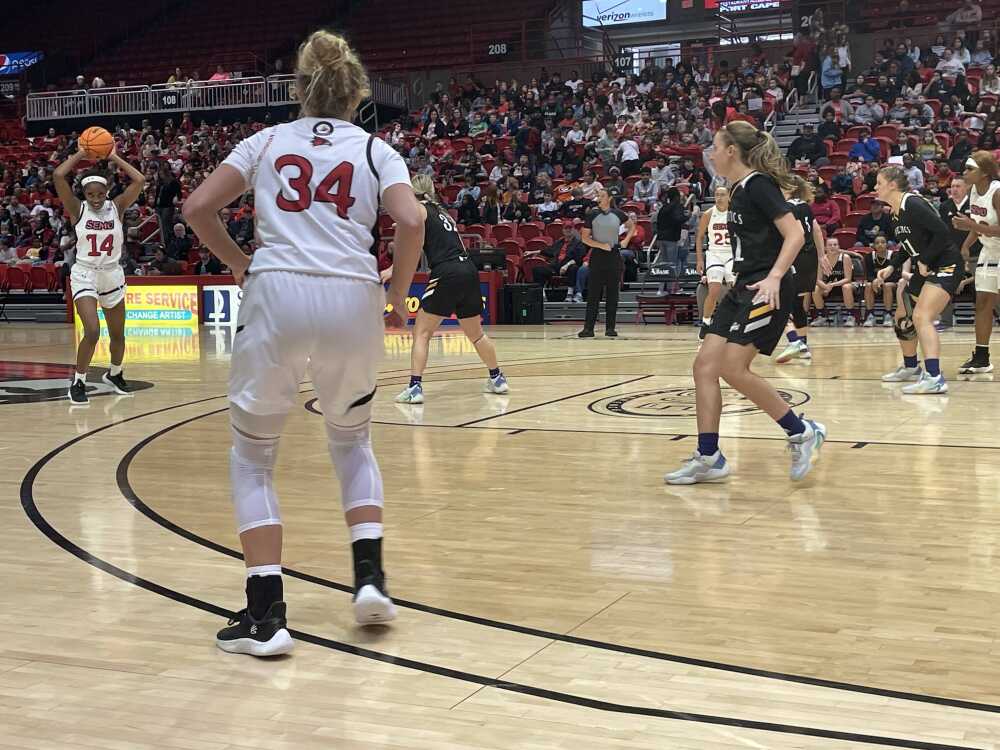 SEMO sophomore forward Kennedi Watkins (14) passes the ball to redshirt junior guard Sophie Bussard (34) during the team's 60-48 victory over the University of Health Sciences & Pharmacy on Nov. 7, 2022. The victory marked the Redhawks’ first of the season.
Photo by Isaiah Collins.

SEMO Women’s basketball kicked off their season with a strong victory, defeating UHSP Eutectics by way of St. Louis 60-48 on Nov. 7 at the Show Me Center. The Redhawks outscored the Eutectics 39-16 in the second half.

Head Coach Rekha Patterson said she was proud of the way her team came out in the second half after trailing by 11 points at halftime.

“Really proud of how this group came out at halftime with a little bit of a chip on their shoulder they dug deep being down 11,” Patterson said.

Sophomore guard Kiyley Flowers said the Redhawks needed to improve their play on the defensive side of the ball in order to succeed in the second half.

“We needed them to stop letting them score so easily and get defensive rebounds,” Flowers said.

SEMO showed this increased defensive energy by forcing 14 second-half Eutectics turnovers. Sophomore forward Kennedi Watkins said preparation in practice is what led to the Redhawks excelling on the defensive side of the ball.

“I think it started in practice. Every day we worked on defense for like half the practice. I think everybody being locked in getting in the gap, making sure that we got each other's back,” Watkins said.

Patterson said it was good for the team to get their first game out of the way and all of the nerves that come with it.

“First game in front of everybody has some jitters and now we can work. It doesn't get any easier with the games we have coming up,” Patterson said.

“It gave us a lot of hope. We went from a losing season last year to getting a win on our home court,” Watkins said.

The Redhawks will look to carry this momentum into a game against the Ole Miss Rebels on Thursday, Nov. 10. The Rebels are coming off a 23-9 season where they qualified for the NCAA tournament as a seven seed.