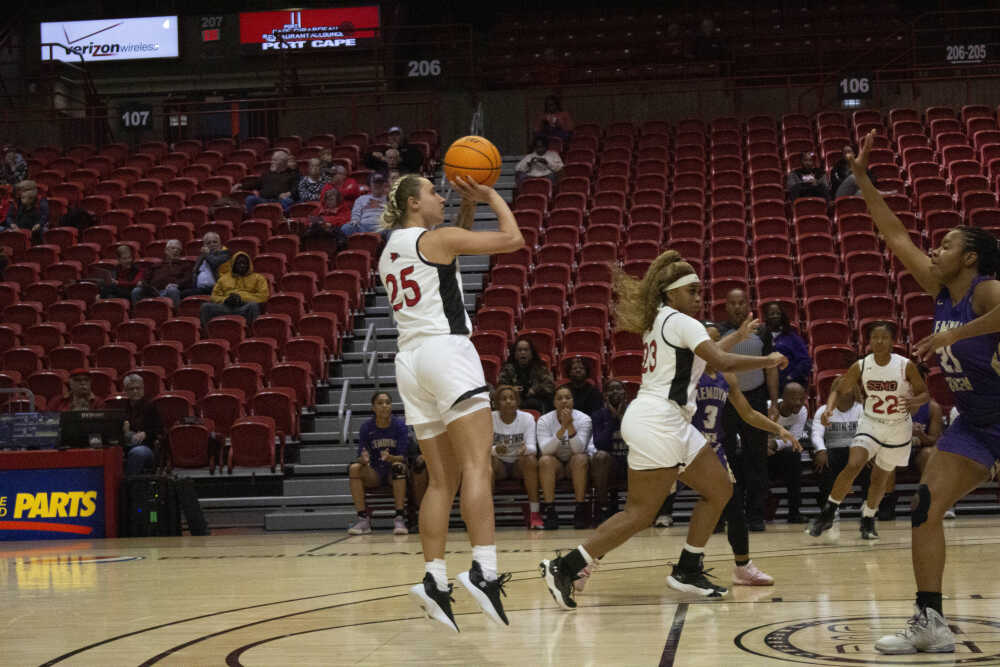 After a couple of tough losses on the road SEMO women’s basketball dominated in their return to the Show Me Center on Friday, Nov. 18, defeating the LeMoyne-Owen Magicians 76-45.

The Redhawks ended the first quarter with a 22-16 lead, before outsourcing the Magicians 27-6 in the second quarter. SEMO was led in scoring redshirt junior guard Sophia Bussard with 15.

The Redhawks outrebounded the Magicians 44-31 and won the turnover battle 16-11. SEMO head coach Rekha Patterson said the Redhawk's fastbreak offense got them the farthest in the game.

“We were able to get out, pass the ball ahead and get layups. I think that was probably the best thing we did,” Patterson said.

SEMO would maintain the dominant lead throughout the second half allowing more players the chance to shine. SEMO played 14 out of 15 players on its roster, making sophomore guard Jaliyah Green a proud teammate.

“They work really hard in practice so for them to come out here and be able to play it was big. They made big-time plays and big-time shots, so we’re proud of them,” Green said.

Rhode Island is coming off a 22-7 season with an NIT tournament appearance and has started this season 2-1. UCF finished the 2021-22 season with a 26-4 record before winning their conference championship. They would then go to the NCAA tournament defeating Florida before a close loss to UCONN, and in this new season, UCF is already 2-0.

Sophia Bussard said these games will be a big test to determine how good the Redhawks are.

“These are gonna be really big for us. I think it’s just another test to see who we are and find out a little bit more about this group,” Bussard said.

The Redhawks will return to the Show Me Center on Dec. 1 when they face Rust College.