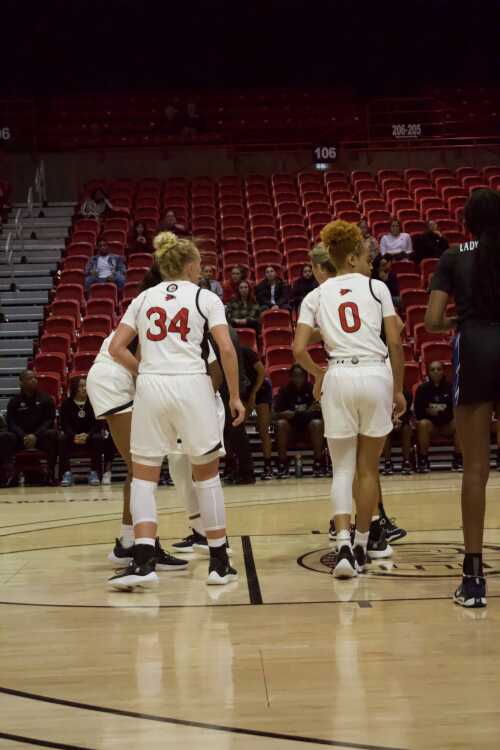 Redhawks guards Rahmena Henderson (right) and Sophie Bussard (left) lined up for a free throw. They scored a combined 31 points in the victory.
Photo by Jeffery Long

SEMO Women’s basketball ended their two-game losing streak with a 63-60 victory over Rust College at the Show Me Center on Dec. 1.

The game started off strong for the Redhawks scoring 15 points in the first quarter, only allowing Rust to score nine. Rust came back fighting in the second quarter. They scored 14 points and made it 26-23 at the half.

The Redhawks had a 15-point lead going into the final quarter, but Rust came back and temporarily took the lead with little time remaining in the fourth quarter.

SEMO took advantage of fouls and passing to score in the final thirty seconds, using free throws to seal the victory.

Redhawks redshirt junior Sophie Bussard says that the team will have to reset following this game.

“It’s an ugly win. But a win is a win,” Bussard said. “We just reset at practice and then focus and then you’re ready for the next team.

The score was close for the majority of the game with the final quarter consisting of only one bucket separating the teams at most times. Redhawks head coach Rehka Patterson said she was proud of her team in the end.

“Really proud of how our team found a way to win down the stretch for such an inexperienced and young team with playing together,” Patterson said. “So it was good to see individual players kind of come together to work together as a team.”

“It came down to stops and that is what we talked about heading into the game,” Henderson said. “We’re a defensive team, so we gotta get what we got to get.”

The Redhawks will travel to Lawrence, KS to take on the University of Kansas Jayhawks on Dec. 4.