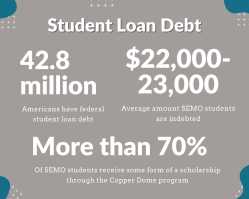 Approximately 42.8 million Americans in the United States have federal student loan debt, according to student loan debt statistics provided by Educationdata.org, making higher education one of the most costly expenses in life. SEMO director of Student Financial Services (SFS) Mathew Kearney said on average, SEMO students are indebted $22,000 to $23,000.

Everyday expenses outside of loans may include rent, food, transportation, gas, insurance and textbooks. If students are not careful, these costs can add up.

Yaskewich said the best way students can avoid debt is to understand and track income and expenditures in order to plan for long-term spending. Yaskewich said some banks break down spending into categories like housing, groceries, restaurants, entertainment, subscription services and travel expenditures.

“It’s typically recommended students have enough savings on them for about six months to a year if they lost their job or were injured. Students should save at least 25% of their paycheck,” Yaskewich said.

SFS director Matthew Kearney said students must live frugally to avoid falling into debt. Students can do this by utilizing campus facilities like the pool and game room instead of paying a high rent for an apartment complex offering those facilities, and not spending unnecessary money on things like eating out or Starbucks.

“Live like a college student now, so you don’t have to live like one when you’re a professional,” Kearney said.

In the past few years, the university has seen a decline in student debt after providing more easily-accessible institutional awards like The Will To Do Award, Pell grants and the Copper Dome Scholarship.

The Will To Do Award covers the remaining cost of college for financially-eligible students after the Federal Pell Grant has been applied. Pell Grants are awarded to students based on financial need and several other factors.

All SEMO students are considered for the Copper Dome Scholarship when they apply, which is awarded on the basis of ACT and SAT scores, as well as high school GPA.

Kearney said for students to not accrue large amounts of debt, they must stay on top of repayments. Students should stay connected with their loan servicer, know what their loans entail when the loan payments are due and utilize loan forgiveness programs.

While Kearney does not recommend or push students to take out loans, he said taking out loans can be seen as an investment.

“Not all debt is bad debt. You can look at it as an investment in yourself to help pay for your education with the idea that eventually, you’ll be making a lot more than you would without a college education,” Kearney said. “In the end, it will be a good opportunity for you.