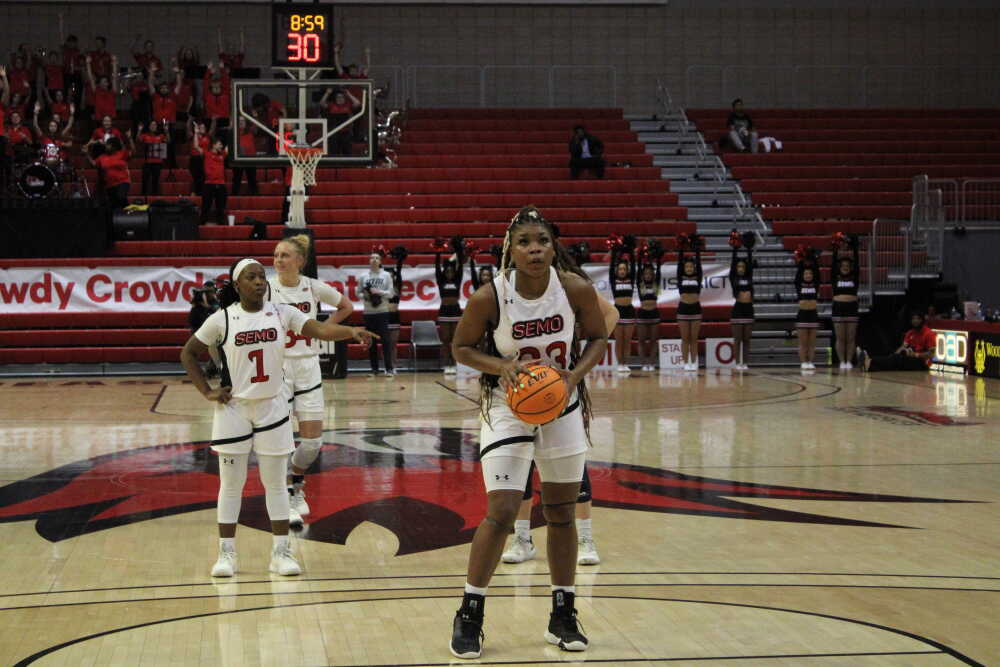 SEMO women’s basketball added to their winning streak with a 56-54 victory over UT Martin at the Show Me Center on Jan. 19.

The game started rough for the Redhawks as UT Martin took an early lead. The Redhawks regrouped and kept up with UT Martin’s fast-paced and physical play. SEMO scored 14 points in the first quarter after regrouping to make it 29-22 by halftime.

The Redhawks made a comeback late in the third quarter with plenty of intercepted passes by the defense and capitalized on the counterattacks. The fourth quarter saw SEMO and UT Martin exchange the lead seven times.

SEMO refused to let the game slip away when junior guard Rahmena Henderson made a three-point shot with 39 seconds remaining to tie the game at 54-54. Redhawks senior guard Kori Tomlin broke the tie, as she scored the go-ahead basket with 0.7 left in the fourth. The Redhawks held back UT Martin and sealed the come-from-behind victory.

The team was behind for the majority of the game but stayed close behind UT Martin to keep the win possible. Tomlin said that the team staying together was part of the process of their performance.

“Stand together,” Tomlin said. “It’s not over until it’s over.”

Tomlin commented on the importance of that game-winning basket for her and how it took a lot for the win to happen.

“In the moment, I was just happy,” Tomlin said. “UT Martin has a good team. They’re a strong team and us beating them took a lot.”

The Ohio Valley Conference basketball tournament is approaching. With 11 more regular season games remaining, each game becomes more crucial by the day. The team had a rocky start to conference play with four straight losses but has now started a three-game winning streak, all of which were against OVC opponents.

Redhawks head coach Rekha Patterson said the team needs to take on a simple mindset in order to succeed.

“We’ve got to keep doing the things that we’re doing to give us success. And just keep it simple.” Patterson said. “We don’t have to try and reinvent the wheel. Let’s keep it simple.”

The Redhawks will welcome the Tennessee Tech Golden Eagles at the Show Me Center on Jan. 21.