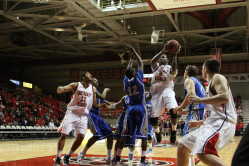 The Southeast Missouri State University men's basketball team is off to its best start since coach Dickey Nutt took over in 2009.

"Well, it feels good," Nutt said. "So far, so good, but we're quick to say the schedule kind of worked out in our favor.

"Right now, in terms of OVC play, we've had four out of six at home. We're getting ready to play four out of six on the road and all the top teams in the league. We're quick to not talk so much right now. We are doing better and we're making some improvements and we are competitive. We've been fortunate enough to get where we can win a little bit. We do feel good about that."

The Redhawks have a record of 10-9 and are in second place in the Ohio Valley Conference with a record of 5-2, but Nutt knows that the team's schedule will only get harder during the remainder of the season.

Southeast was picked to finish sixth in the OVC before the season. Austin Peay, Tennessee Tech, Murray State, Tennessee State and Morehead State were picked ahead of the Redhawks. Six of Southeast's final 11 games will be against those teams.

The Redhawks will travel to Murray State on Feb. 2 to face the current OVC leader. The Racers are the only undefeated team in Division I and are ranked ninth in the nation by the ESPN/USA Today coaches' poll.

"I think anybody can tell you that anytime you play a top 10 team in the country, that would be a huge challenge for us," Nutt said.

"It's one that we're looking forward to. Anything can happen in conference play. I tell my players all the time that conference is different. That's why you want a team to be as high as they can be, like Murray is having great success. We want them to have that success because it brings a lot of attention to our program and our league. Going to play them is going to be a tremendous challenge for us."

"We just want to win," senior forward Leon Powell said. "Keep winning and at the end of the day make it to the tournament, win the OVC Tournament."

The OVC Tournament is scheduled to take place Feb. 29 through March 3. Last season, Southeast won its first-round game against Eastern Kentucky but lost in the semifinals to Austin Peay.

"I think right now we need to shift into second gear," Nutt said. "I feel like we got off to a good start in the OVC, but I do feel that the real test is coming. I think that we continue to grow as a team and stay as close as we can and lock arms because the storm is coming and we've got to weather some of this tough storm, tough teams coming up. We've got to continue to grow as a team, and I think we'll do that. "

The team's next game is at 7 p.m. Jan. 26 at the Show Me Center against Austin Peay.