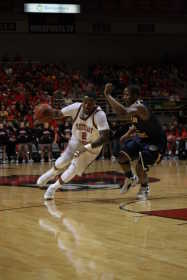 The junior guard was held to nine points and 2-for-11 shooting against Southeast on Wednesday night, but sophomore forward Donte Poole scored a game-high 25 points in Murray State's 75-66 win.

"It shows our toughness, how deep we are as a team and how tight we are," Poole said. "Not every game is going to be Isaiah's day. Not every game he's going to score 30 or 20 points, so that's just when other guys have to step up, and our team is deep enough and we're versatile enough to do that."

Southeast coach Dickey Nutt said that his team put an emphasis on stopping Canaan, but Poole ended hurting it the most by shooting 7-for-13 from the field and making four 3-pointers.

"We did a good job of getting the ball out of [Canaan's] hands, double-teaming him when we could and treating him as the pro player that he is," Nutt said.

Canaan was held to well below his season average of 19.2 points per game and his season shooting percentage of .476, but he was not the only top player who struggled.

Southeast sophomore forward Tyler Stone, who leads the team in scoring and rebounding, was held scoreless and collected two rebounds in 15 minutes on the court. Nutt decided to give junior Michael Porter and freshman Nino Johnson playing time that is normally allotted to Stone.

"We have good depth, and when things aren't clicking well for you and you're not in sync or whatever it may be, other guys are coming in playing their roles," Nutt said.

"We really try to emphasize getting the ball inside and [Murray State] did a good job of preventing us from doing that. Their strong bodies defensively really pushed Tyler out ... We just can't do it that way. We've got to get it inside."

The defense of forwards Ivan Aska and Ed Daniel was able to limit Southeast to 26 points in the paint. They hounded Stone and senior forward Leon Powell when they tried to score from the post, and altered shots on drives to the basket by Southeast's guards.

"That was really the key to the game, man," Aska said. "Coach was just saying to keep them out of the paint and just try to box them out every time."

Aska had the game's second highest point total with 14 and had a game-high nine rebounds.

Southeast led twice in the game, and never after the 14:02 mark of the first half. Murray State extended its lead to double-digits 11 times, and Southeast never came within four points after the 2:45 mark in the first half.

Powell led Southeast in scoring with 13 points and in rebounds with eight. Corey Wilford scored 12 points and was 3-for-7 from 3-point range.

Southeast seniors Powell, Marcus Brister, Zach House and Logan Nutt played their final home game in front of the fifth largest crowd in school history. 7,125 fans filled the Show Me Center. It was the first sell out for the school since 2000 when it hosted Murray State.

All of the tickets available to the general public were sold, and all 1,200 tickets made available to Southeast students were taken. The second highest attendance total for a Southeast home game this season was 3,500 against Tennessee State on Feb. 4.