Southeast women's tennis coach has high hopes for the 2012 season 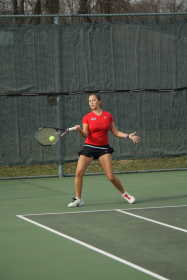 Laura Garcia, who is one of three members on the team not from the United Kingdom, practices on Friday, Feb. 17. - Photo by Nathan Hamilton

Southeast Missouri State University women's tennis coach Mark Elliott is optimistic that the 2012 team will be the most successful team that he has coached in his five years at the school.

"I think it would just be great if we could really make him proud this season because I guess he hasn't had the best of records with his teams," sophomore tennis player Elizabeth Nyenwe said. "But we're definitely getting better, and hopefully we will be able to give him more to be proud of."

Elliott said that in the past the team has been unable to fill all of its scholarships due to his program's lack of success. He also said that players have had problems with their fitness levels and lost players due to injuries.

"We've got the best team that I believe we've had since I've been here," Elliott said. "We've got a healthy team for a change. Usually in the past with the small number that we can afford for tennis, we've had some injuries that have hurt our ability to compete. We're just trying to stay healthy so we've got six good players who participate in all our matches."

Elliott said that the team's fitness level is going to be important this year and that in its first two matches the Redhawks weren't as tired as their opponents.

"Two days a week we do weight training and then we go two or three days a week to the pool and do water fitness," Elliot said. "We're being helped by one of the young ladies from the soccer team who is rehabilitating and she knows the water fitness really well, so she comes out and helps us out. She's been fantastic."

"We're playing some pretty good teams," Elliott said. "I've tried to get the good teams to play against so we can really see how good we are going to be this year. We just played two that were completely funded by full scholarships. That means they've got eight players that have full scholarships and we don't quite have that many. We've got about six, so we're close. I was pretty pleased. Against Arkansas we won our first match ever that we've ever played against them."

Nyenwe was ranked fourth in the preseason list of top 10 OVC players, while Novikova was ranked 10th.

"I have to win a few matches, not only in singles but doubles as well," Novikova said. "I've been on the team for two years so I have a better idea of what to expect, and it'll definitely help if I can get out of the singles pool and get us a couple of points."