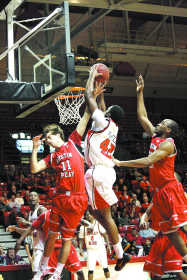 When Dickey Nutt was hired as the head coach of the Southeast Missouri State University men's basketball team on March 12, 2009, he took over a program that had not won a single Ohio Valley Conference game during the previous season and had an overall record of 3-27.

"The first thing that we wanted to do was we wanted to make sure that we lay a foundation," Nutt said. "And not to talk about the past at all, I'm not saying that they did anything wrong. I'm just saying that when we started, we wanted to look from that day forward. And the first thing that I felt like we needed to do was lay our foundation and get character guys in here -- get some guys in here that believe in what I wanted to do and that were good people first. And then we felt like once we got the foundation laid, we were able to move forward and build our program. "

Marland Smith, Lucas Nutt and Leon Powell were the first three players Nutt decided to recruit when he came to Southeast because he said they would be players that would, "go to class and understand that it's not just about playing ball."

"It's about going to class and being a teammate and a student in your university, and we were able to get that accomplished I feel like," Nutt said.

It was the first time the Redhawks finished with a winning conference record in 12 years.

"Although we've been here three years, and I know you technically have to count three years, we feel like the first year we got started so late," Nutt said. "I feel like I'm in the second year of a four- year process. We feel like with another year or two recruiting, with recruiting classes of good, solid student-athletes, we will be a good contender in the league. Right now, this year, our hopes were to be a contender, first or second place, but we fell short. We finished fourth, but we did make a giant step. I feel like we made a really good step, but I feel like we're on course, we're on pace."

The Redhawks were in position to finish second in the OVC until the final two games of the season. The team went into the OVC tournament on a four-game losing streak before defeating Eastern Kentucky in the first round.

The entire season was a rollercoaster ride of games that should have been won and games that were just out of reach.

Southeast lost by four points to Eastern Kentucky, who finished eighth in the OVC, on Jan. 7, and led then-undefeated Murray State on Feb. 2 by six points at halftime but lost the game by eight points.

The team also lost its final two regular-season OVC games to teams it had beaten earlier in the season. The Redhawks defeated Jacksonville State 74-56, but lost to them 69-59 on Feb. 23. The team had also beat Austin Peay 65-60, but lost 68-59 in its final game of the regular season.

Probably the most difficult loss for Southeast came in the OVC Tournament quarterfinal game Thursday against Tennessee Tech. The Redhawks showed improvement from their 77-62 loss to Tennessee Tech on Jan. 21, but lost 77-73 after charging back from a 19-point deficit.

"We are sick, sick to our stomachs..." Nutt said following the loss. "The exciting thing about that is that we played most of that game with all underclassmen, and that is what we feel good about. We feel good about the character of this team and the progress that we are making. It's just another hurdle that we hadn't been able to get over is that second game of the tournament. It could have gone either way."

Smith, a junior guard, said that the coaching staff expected more from the team this season and that the players were guided throughout the season, with the coaches correcting mistakes.

"The only way to fix this program is when something's not right to tell us and correct it," Smith said. "He approaches it in a positive manner. It's all learning, especially on film-room day. That's when we do a lot of criticism, and it's all only to help us get better."

Nutt said that he was able to call out specific players on and off the court more than he had done in his previous years at Southeast because he was more comfortable with the team and because he expected great things from them.

During a season that has had ups and downs on the court, there were also ups and downs in the crowd. The Show Me Center was sold out for the first time since 2000 for the Redhawks OVC contest against the league's regular-season and tournament champion Murray State. More than 1,200 students lined up in the rain, crowded along the bridge outside of the Show Me Center to attend the game. Five hundred students received free T-shirts saying, "Boom, Boom, Pow-l," in reference to Leon Powell's dunk at Murray State that ended up on SportsCenter's Top 10 Plays.

"You know, that's college basketball," Nutt said. "This is what we dreamed of, this is what we talked about: building this program and getting it back to the glory days that they had when they were under coach [Ron] Shumate and coach Gary Garner. They had crowds that were very, very good. We were able to get some of those crowds this year, at some of these games, especially Murray State, Austin Peay, some of those games that were very good for us, so we were excited about that."

Powell, Marcus Brister, Logan Nutt and Zach House have used up their eligibility, but many younger players are ready to step in.

"We feel like we have done a good job of preparing for their departure," Nutt said. "We have young guys: Michael Porter, Lucas Nutt, Tyler Stone, Marland Smith. Those guys are right in line to take up where they left off. They've done a good job for us. We have four really, really good seniors, and we're very proud of those guys."

Two freshman, three sophomores and three juniors were on this year's roster. Porter, Lucas Nutt, Stone and Smith played in all 31 games.

"They'll definitely be good," said Powell, who averaged 10.6 points and 7.1 rebounds per game this season. "They've got a lot of young guys on the team. Some of those guys that don't even play as much still can play. It's just unfortunate that we have a good starting five, a good starting eight. After we leave -- me, Marcus, Logan and Zach House -- they'll still be good."

Smith has been a leader on the floor for this year. Smith said that because he is not very vocal, he has tried to lead by his actions. He averaged 12.3 points this season and was a 78 percent free-throw shooter.

In addition to the returning players, the Redhawks announced on Nov. 10 that they had signed three players. Jared White and Colin Ferguson from De Soto, Mo., and C.J. Reese from McCallie Prep School in Chattanooga, Tenn. signed national letters of intent to play for Southeast next season. Freshman and 2011 graduate of Cape Girardeau's Notre Dame High School Jacob Tolbert joined the team as a walk-on Dec. 29.

"We're going to have some new additions to our team and I feel like that will add to a very strong nucleus that we'll have returning, so our recruiting looks good," Nutt said. "We still are probably one or two players away from being complete, but we're getting better."

After two seasons in which the team has played in the OVC Tournament and won its first round game, next season will bring higher expectations.

Sean also said that the team believes in what Nutt is doing at Southeast to build the program and the futures of his players.

"We want them to succeed in the classroom," Nutt said. "We want them to succeed as a man, whether he becomes a dad or a businessman. We want to see them succeed and I think playing basketball on this level has a lot to do with that. I think putting these guys through what we put them through day in and day out and trying to be an example, not that we make all the right decisions, but be an example that one day they can look back. Because when they're 30 years old their record is not going to mean anything.

"What they've done here is not going to mean anything other than the fact that they've made some good strides in learning how to become a man."