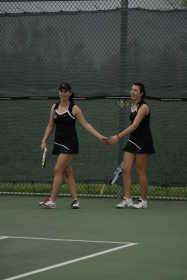 It was an easy task to get Melissa Martin and her family to visit southeast Missouri and sit down with women's tennis coach Mark Elliott and talk about playing tennis at Southeast Missouri State University.

"Nigel Sears, a friend of mine, emailed me about Melissa, and I'm very happy that she chose to come to Southeast," Elliott said. "While she still has a lot to learn as a freshman, she's a really good competitor and has a pleasant attitude, and I'm very lucky with all of the ladies on the team."

After her sister's graduation at the University of Indiana, Martin and her family traveled to Cape Girardeau for a tour of Southeast's campus.

"I emailed tons of universities in America, and I went from there and they offered me the best scholarship," Martin said. "I really like the Southeast campus, it's fun."

Martin is a freshman from Wolverhampton, England who started taking classes last semester. Martin has yet to declare a major at Southeast but plans on studying fashion merchandising.

Because Martin has been training six out of seven days a week, she hasn't been able to experience much of Southeast and its surroundings. She's not involved with any student organizations, but instead has chosen to focus on her fitness. Martin said that in tennis it's important to be in tip-top shape.

Martin takes her opportunity to play tennis at Southeast seriously, and she gave an insight of what it's like when she's on the court.

"It's all about the battle of the fittest," Martin said. "If you've got more fitness, it doesn't matter if your game is good because you can outrun them. It's a lot about skill and natural ability as well, and it's important to go on the court with a good mindset. But you have to adapt with how the other person is playing as well with how you're doing, too."

Martin started playing tennis when she was 5 years old and began competing when she was 11. She also learned to play tennis with her sister Charlotte. She laughed when asked if she was better than her sister.

"I'm five years younger so you have to put that in the picture," Martin said. "But no, she's better than I am. "

Charlotte played tennis at Indiana and was successful. In 2009-10, she finished with overall records of 11-6 in singles matches and 12-8 in doubles matches and was named Big Ten Distinguished Scholar and earned Academic All-Big Ten honors.

The ranking system in England is similar to the one in the United States. Every tennis player that enters a tournament gains a certain amount of points depending on how far they progress. These points are added up over a long period of time. If a player doesn't do as well in a tournament than the year before, points are lost.

One of Martin's memorable moments was when she had the chance to compete at Wimbledon, playing in two matches in the 14-and-under competition.

"I had a pretty big win at Wimbledon," Martin said. "In the rating system I was a 7.2, which was quite low. My competitor was a 5.2, which was reasonably high and I beat her."

The season seems to be starting off well for Martin, and she said she's focused on the team's remaining opponents.

Last semester, Martin started with a 2-3 in singles and a 6-1 in doubles with Jessica Courtnell.

"In doubles, I play with Jessica and we have never played together before, so we didn't know how each other played," Martin said. "But this semester has been better but harder because of the increased competition and there have been tougher matches. But I love doubles, it's really fun."

At the Red Wolves Invitational at Arkansas State, Martin and Courtnell played in the third leg and managed to win the whole thing. While in singles, Martin went 1-3.

But while Martin seems to be taking full advantage of studying abroad, sometimes she gets homesick. Martin said England is a lot different than the United States, especially the weather.

"It's hard being away from England at times because it's my home and I miss my family but having my teammates and having guidance from my coaches make it better," Martin said. "I love the team atmosphere and team spirit and it makes me want to do better because you're working for a team and not just yourself and it makes us become closer on the team."