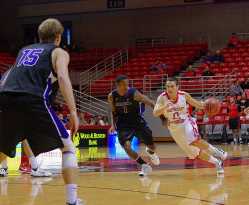 Southeast's guard Lucas Nutt drives around Ouachita Baptist's Micah Delph during the the first half of a game on Oct. 30 at the Show Me Center. Photo by Nathan Hamilton

"Well, obviously expectations are a lot different this year," Southeast coach Dickey Nutt said. "You know we're not going to be able to sneak up on anybody like we did last year. Right now, if we don't start guarding anybody, that second pick in the league isn't going to mean anything."

Last season, the team was picked to finish sixth in the OVC. The Redhawks finished one game under .500, with a record of 15-16 overall and 9-7 in conference play, earning fifth place in the OVC standings.

"This year we're going to take it one game at a time, that's it," Southeast guard Marland Smith said. "Our main goal is to get those win columns." 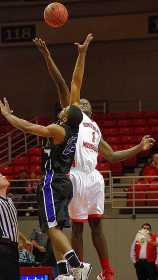 Southeast forward Nino Johnson competes for the jump ball at the start of the game against Ouachita Baptist on Oct. 30 at the Show Me Center. Photo by Nathan Hamilton.

The Redhawks will be tested by Murray State, and will also face Southern Illinois University Edwardsville, which Nutt believes to be under the radar.

"I think SIU Edwardsville has a chance to be really good," Nutt said. "I think they had a good recruiting class. They had a lot of guys sitting out, and they have a lot of guys come back. There are a number of teams that look really good, and we're right there along with them."

The OVC also added Belmont University, from the Atlantic Sun Conference, on July 1. The Bruins finished with a 27-8 record and received a No. 14 seed in last year's NCAA tournament.

"I think it's great for our league, and I think it does a lot for us," Nutt said. "We're able now to recruit, since Murray State with what they were able to do last year. We're able to tell our recruit and use in our recruiting, that we're playing in front of sellout crowds in the conference play. Belmont's team is going to be just that. I promise you, when they come in here it's going to be sold out. Belmont is such a nationally known team."

"Man, I'll be focusing on defense for real," Stone said. "That's one thing our coach pushes is to play defense and stop people."

Guard A.J. Jones, a junior college transfer who had to sit out last season, will be eligible. Jones scored a game-high 18 points and led the team with four of its 12 assists in the Redhawks first exhibition game against Ouachita Baptist.

"I just have to remain poised," Jones said.

The Redhawks will kick off the regular season against No. 7 Kansas at 7 p.m. Friday at Allen Fieldhouse.