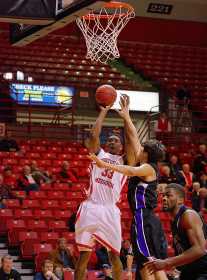 Southeast forward Tyler Stone shoots one handed over an Ouachita Baptist defender during an Oct. 30 game at the Show Me Center. Photo by Nathan Hamilton

After the Southeast Missouri State University men's basketball team finished its scrimmage on Oct. 26 most players headed for the locker room, but junior forward Tyler Stone stayed on the court. He started out shooting jump shots from the corner and then worked on post moves.

"You can't be perfect," Stone said. "I've always got to be working on something, whether it's driving, shooting jumpers, hook shots, anything. Our team has got to work on defense more."

Southeast coach Dickey Nutt said Stone is always the first in the gym and last to leave and that he improved his ball handling, shooting and physical condition in the offseason.

"His body is bigger and stronger, and he's faster," Nutt said. "I'm really proud of what he's been able to do and develop."

Stone said he spent the summer "eating right, sleeping right and working out."

He also spent a week in Brazil as part of a trip sponsored by the Sports Reach Sports Ministry organization.

According to the organization's website, some of the things teams do are play exhibition games in different areas and lead camps or clinics for churches.

The team Stone was on played in five exhibition games throughout Brazil and won the fifth annual International Terra de Sole Basketball Cup. Stone averaged 21.2 points and 12.4 rebounds during the trip.

"I think to me that was a lot bigger than basketball, really. We helped a lot of kids out and stuff," Stone said. "But it was a great getaway, great time playing ball."

Stone's improvements have been noted by other coaches in the Ohio Valley Conference and he was selected as preseason all-OVC.

Stone transferred from the University of Missouri after the 2009-2010 season. He played in 12 games and averaged 1.8 points per game at Missouri. He had to sit out the following season due to NCAA Division I transfer regulations.

Last year, his first eligible season at Southeast, Stone led the Redhawks in scoring and rebounding. He averaged 14.7 points and 7.3 rebounds per game. He was named to the second team all-OVC and the OVC all-newcomer team.

"I think offensively, he has that scorer's mentality, but defensively, we are not where we need to be," Nutt said.

Nutt said that the coaching staff reprimands Stone in practice every day, so he takes better shots and plays harder defensively.

Stone finished with 16 points and 12 rebounds in Southeast's first exhibition game of the season against Ouachita Baptist on Oct. 30.

"What I love about Tyler Stone is that he's an underclassman," Nutt said. "He still has two full years to go. And I encourage our fans to come out and watch a good player."

The Redhawks' regular-season opener is against No. 7 Kansas at 7 p.m. Friday in Lawrence, Kan.