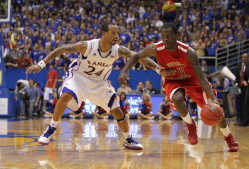 The Southeast Missouri State University men's basketball team walked into Allen Fieldhouse as the underdog and held its own against No. 7 Kansas for the first 25 minutes of the game. In a valiant effort, the Redhawks lost to the Jayhawks 74-55.

"Tonight was a special game for us," Southeast coach Dickey Nutt said. "I thought we played hard and was proud of our team."

The Redhawks played in arguably one of the loudest basketball arenas in front of a sold-out crowd of 16,300 people.

"This is the best team I've ever played with in my life," Southeast guard Nick Niemczyk said. "It was just a great experience all around."

The Redhawks were held scoreless in the first four minutes, and eight seconds of the game and allowed the Jayhawks to go on an 11-0 run. Southeast forward Nino Johnson nailed a jumper to put up the team's first points 11-2.

"They were very long and athletic," Johnson said. "It was kind of tough."

Niemczyk came off the bench and scored his first points of the season on back-to-back possessions. He made a layup and a 3-point basket to cut the lead to 15-7 with 10:29 left in the first half.

Niemczyk led the Redhawks in scoring, finishing with 14 points for the night.

The Redhawks made 6-out-of-29 attempts, shooting 20.7 percent from the field.

The Redhawks trailed 32-17 heading into halftime.

"I thought we beared down in the second half and calmed down a bit," Nutt said. "We did a better job in the second half of slowing them down. We tried to go with a matchup zone and really stay matched up with people. We did a decent job with that."

The Redhawks forced 20 turnovers and held the Jayhawks to 38.7 percent from the field at the end of the night.

Johnson fared well and had a career-high 12 points, nine rebounds and two blocks. 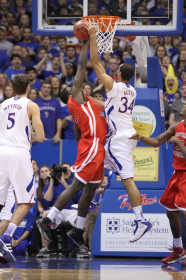 Southeast forward Tyler Stone cramped up twice in the back of his leg but finished with eight points, six rebounds and two steals.

The Jayhawks pulled away in the final 20 minutes and secured their largest lead by 21 points.

Southeast will play Lyon College in its regular season home-opener at 7 p.m. Monday at the Show Me Center.

"This is a night we can take and build off of that," Nutt said. "Why not play the best? And Kansas is the best. We're going to build off this and I do feel like our guys will walk away with just a little bit more confidence that we can play and be better."