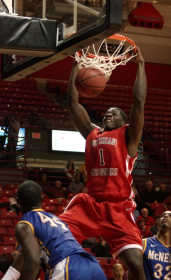 "We just play," Johnson said. "One, if somebody is open, you know, it's really about let's find the open man even if it was a guard. You know, we just find an open guy. If we catch it in the post, they did a lot of double and triple teaming, and it was our best bet to get it out, inside and out. That's what coach preached."

Johnson scored in double figures for his third consecutive game, recording a game-high 20 points, nine rebounds and three blocks in the game.

"I thought it was a good solid win to see where we were at," Stone said. "I'm pretty happy about the outcome and we did what we're supposed to do."

Southeast made 14-out-of-24 attempts, shooting 58.3 percent from the field in the first half. The team scored 18 points in the paint and committed six turnovers.

"We're very pleased how we played tonight for the most part," Southeast coach Dickey Nutt said. "More importantly, I'm really proud of our bigs because we really tried to hammer the ball down inside without being impatient and our bigs really came up big."

Early in regulation, the Redhawks trailed by seven points until Southeast guard Corey Wilford nailed a 3-point jumper that gave the team a 13-11 lead with under 13 minutes left in the first half.

"I thought Corey, getting back in the groove helped us a little bit," Nutt said.

The Redhawks continued to go on a 14-4 run with under seven minutes left in the first half, then 45 seconds before heading into the locker room, Southeast guard A.J. Jones connected a lob to Johnson to put the team up 33-24.

In the beginning of the second half, the Redhawks came out with more intensity.

The team went on a 15-2 run in the first six minutes, and 40 seconds in the second half.

"We picked it up throughout the game and we finished it out and still held them under 40 percent shooting," Smith said.

With 3:04 left to play, McNeese State guard Jeremie Mitchell made a 3-point shot, still trailing by double-digits 59-49. However, Johnson answered with a dunk to help the Redhawks pull away, raising the lead to 11 points in final regulation.

Southeast shot a season-high 54 percent from the field and outrebounded the Cowboys 33-29. Southeast had 17 assists and forced eight steals.

The Redhawks held the Cowboys to 35.7 percent for the night and 27.8 percent from beyond the arc.

"Overall it was a good win for us," Nutt said. "I was really proud of our fan support tonight. I can't say enough about that, and being here, over 2,000 people to watch these guys play. It means a lot to our team. These guys play just as hard as they can most times. They deserve a good crowd and I really appreciate that. It was a good night for us."

Southeast's next game will be against University of Tennessee at Chattanooga as a part of the CBE Classic at 2 p.m. Sunday in Chattanooga, Tenn.

"Chattanooga is going to cause a lot of problems," Nutt said. "They're a good team, they've historically been very, very good."

"It's a great learning tool for us," Nutt said. "Were going to treat it like a tournament play, which it is to some degree. That's why this game was critical. McNeese State was a must-win game because the next five out of six are on the road. Chattanooga's very good at home, Louisiana Tech coming out of their league are really good and then you look at Troy, which plays all zone."