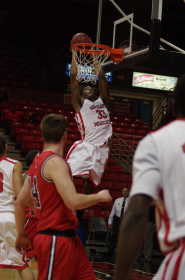 Southeast forward Tyler Stone does a layup during Nov. 27 game against Hannibal-LaGrange at the Show Me Center. Photo by Nathan Hamilton.

The Southeast Missouri State University men's basketball team improved to 4-4 on the season in a 96-55 rout against NAIA Hannibal-LaGrange University on Monday at the Show Me Center.

After losing their last three games on the road, the Redhawks returned home for the third time this season where they remained unbeaten.

"We appreciate Hannibal-LaGrange and the first class program that they have and their coach," coach Dickey Nutt said. "But, we got what we needed to accomplish and that was a big win."

Southeast Guard A.J. Jones excelled beyond the arc, making 6-out-of-8 3-point attempts and dished out three assists. He recorded a game-high 24 points coming off the bench for the Redhawks.

"It's cool," Jones said. "I wasn't really mad coming off the bench because it's a team thing and I know coach Nutt had a better game-plan or good strategy to bring me off the bench probably for more energy."

The Redhawks got off to a fast start with a 8-0 run in the first three minutes, and 30 seconds of the game. The team never gave up the lead.

"The defense has been steady, but the offense has been very inconsistent and rebounding the basketball defensively is good, offensive not very good," Nutt said. "Tonight we didn't have very many opportunities to rebound the ball on the offensive end, but we kept them from getting too many offensive rebounds."

With 9:56 left in play, the Redhawks were up 73-43 and had nothing to worry about. The Trojans would only score 12 more points while Southeast would score 23 more points to win 96-55.

Southeast Forward Nino Johnson scored 17 points and had seven rebounds in the game. The Redhawks made 13-out-of-16 free throw attempts, shooting 81 percent from the line. Hannibal-LaGrange only attempted five free throws in the game making two.

"It's great obviously, coming off a losing streak and getting this win tonight," Johnson said. "It could have been better. We need to hit that hundred mark. There's stuff we need to work on but it was a pretty good game, especially from our guards. They played outstanding."

Forward Tyler Stone also chipped in 13 points and grabbed seven rebounds in the win. Coach Nutt didn't know if Stone would even be able to play.

"I was worried about Tyler [Stone] a little bit," Nutt said. "He's been nursing a hip-flexor and we weren't sure if he was going to play tonight. But, he was warmed up and feeling good and he got some good treatment and I thought that he played well."

Southeast's next game will be against the University of New Orleans at 6 p.m. Thursday in New Orleans, La.