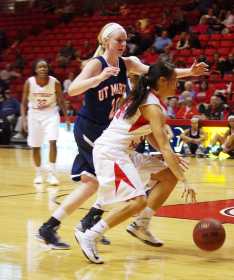 Southeast guard Jordan Hunter dribbles past an opponent during the game against UT Martin Jan. 16 at the Show Me Center. Photo by Nathan Hamilton

The Southeast Missouri State University women's basketball team is off to its best start in nearly five years. In just his second season, coach Ty Margenthaler's team has a record of 8-10 and is 2-3 in the Ohio Valley Conference.

"I'm not a moral victory guy. I told our players that after the ballgame," Margenthaler said after the loss to UT Martin. "This program has gone another step than that, and I think we have a lot to be proud of, but again we didn't do some of the little things down the stretch to complete the game. But we put ourself in the position to win the game and a layup here, maybe not a foul there, it's reversed. We're right there and UT Martin, they're a quality, quality basketball team, well-coached as you can see tonight, just two tremendous guards. That's why they've been so successful the last two years and doing so well this year."

Turnovers have consistently been an issue for the Redhawks this season and were a big factor in their game against the Skyhawks. Southeast is averaging 17.2 per game and 18.8 per game against OVC opponents. UT Martin scored 31 points off of Southeast's 18 turnovers.

"It's something that we stress about and we talk about," Margenthaler said. "Our goal as a basketball team is 15 and under."

Junior Jordan Hunter is averaging 3.9 turnovers per game, but also leads the Redhawks with 3.9 assists per game, 1.4 steals per game and 10.8 points per game.

"Our young kids really took a big step tonight and again, that's a credit to where this program is going," Margenthaler said. "We're not where we need to be at right now, but if we can learn from this game and play with this focus and energy against everybody, we're going to be where we want at the end of the year."

Southeast has had several games that multiple players scored in double digits, including against UT Martin. In addition to Hackman's 13 points, senior Brittany Harriel and sophomore Allyson Bradshaw had 13 apiece, and Kara Wright and Bailie Roberts finished with 10 points each.

"I think it gives us an advantage because any given night someone can step up and really take over," senior Bailie Roberts said. "If someone's hot at a certain time we've just got to continue getting that person the ball and just really cheering on somebody. You can't always just stop one player because someone else is just going to step up. I think that's going to be a huge thing that's going to help us in the stretch is knowing that people coming off the bench are going to help us just as much as the starters do."

"The fact that we competed, it proves a lot," Roberts said. "It proves to us, as a team, that we in fact can do it. And also I think it kind of makes a statement to the rest of the league that we're right there with everyone, but we still definitely have things that we've got to work on. The main thing I think is just playing the 40 minutes."

Southeast's next game is against OVC opponent and West Division leader Eastern Illinois at 4 p.m. Saturday in Charleston, Ill.