Injuries and a short roster could inhibit the Southeast tennis team

Southeast Missouri State University's tennis team has only one new addition this season -- its coach. Southeast hired Josh Moore, who was the coach at Texas A&M University-Kingsville, an NCAA Division II school during the school's first tennis season in 2012.

Former coach Mark Elliot coached six seasons at Southeast but didn't have his contract renewed after last season came to an end.

"For me personally, it's a new club and I'm not used to having to defrost my windows as much coming from south Texas," Moore said. "Every school is a little unique in what you're recruiting to. Before, I was recruiting to palm trees, sunshine and now I'm recruiting to the Midwest, so it's a little different level, different record." 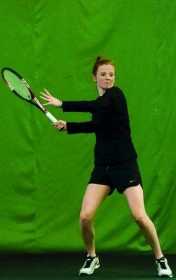 Heather Robinson prepares to hit the ball at practice on Wednesday at the Redhawk Tennis Complex. Photo by Alyssa Brewer

"Everyone on the team knows each other quite well, but you don't have freshmen pushing the upperclassman to keep their spots and to do better," Moore said.

Southeast is at a disadvantage with its roster size. The team returns six players this season, five scholarship athletes and one walk-on. Six players is the minimum number of players a team can have on its roster.

Eastern Kentucky grabbed 10 out of a possible 11 votes to finish No. 1 in the Ohio Valley Conference preseason poll voted on by the league's coaches. The coaches could not vote for their own team, so UT Martin received one vote to finish in first. Both EKU and UTM have eight athletes on their rosters. Southeast was chosen to finish ninth in the poll.

"Some of the coaches are probably looking a little bit more at last year's [OVC] results, which were pretty disappointing at 2-7, but I mean the only thing we can do is play each match and hopefully prove them wrong," Moore said.

The Redhawks finished 5-12 overall last season. Elizabeth Nyenwe led Southeast with a record of 14-10 in singles play. This season, she was tabbed as the seventh best player in the OVC preseason top-10 player rankings, voted on by OVC coaches.

But Nyenwe is currently suspended due to a violation of team rules, according to Moore. She has to meet requirements before she can come back. Moore did not say what the requirements are or what team rules she broke.

Moore thinks that the team could be better, but looks at the losing records of the past few seasons as a weakness.

"Psychologically, if you look at the team's record the past few years, we haven't won more than two conference matches in a season," Moore said. "It's a matter of going into a match as confident instead of thinking about last year's record. Talent wise they can match up with anybody in the conference, it's just a matter of believing in themselves."

"I think everyone is really good, we all get along really well," Novikova said. "We just need to try and keep it together, and I think we'll win matches."

Martin, who prefers playing doubles, would like to improve her doubles record this season.

"Just trying to keep the ball in play, don't go for anything too soon, just to be more steady in it, to be more controlled and commit less errors," Martin said about how she is trying to improve her doubles play.

Moore hopes the team is able to make it into the field of six teams that qualify for the OVC tournament this season. However, half the roster is constantly getting treatment for injuries. Martin, Novikova and junior Lauren Schaper have been battling minor injuries. They are expected to be able to start the season healthy, and if the team can stay healthy, it has a chance to make the tournament, according to Moore.

"Our goal is definitely to make the conference tournament this year," Moore said. "Might sound a little high, but our goal for next year is to win it and then the year after, to move up the national rankings."