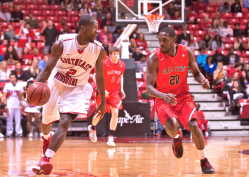 Left: Southeast guard Marland Smith shoots a free throw during a game against Ball State on Saturday at the Show Me Center. Photo by Alyssa Brewer

The Southeast Missouri State University men's and women's basketball teams are in the final week of its seasons, but only the men's team have a chance to earn a spot in the OVC tournament.

The OVC tournament will be held March 6-9 at the Nashville Municipal Auditorium and the men's team currently sits in sixth place in the conference standings. The top eight teams compete in the tournament.

Four teams have officially received berths to the tournament. Belmont, Eastern Kentucky, Tennessee State and Murray State will be the top four teams, but the exact rankings have not been decided.

The Redhawks face Austin Peay at 7 p.m. Thursday in Clarksville, Tenn., and Murray State at 7:30 p.m. Saturday in Murray, Ky. 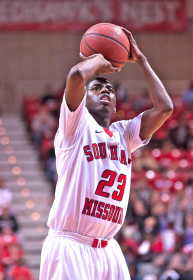 Southeast guard A.J. Jones dribbles down the court during a game against Ball State on Saturday at the Show Me Center. Photo by Alyssa Brewer

"Well we've got two games on the road, hard games coming up," Southeast coach Dickey Nutt said. "You've got Austin Peay, a very difficult place to play. They may be the best [3-11] team that I have ever seen. Watching some of their games, they're just as good as anybody and they've had some tough luck, a lot of overtime losses, balls go in at the end of the clock or the end of the game. To be [3-11] it's amazing how good they really are. So I know that's going to be a difficult challenge for us, but I think our guys will be ready for it and then you've got to go to Murray State back-to-back, 48 hours apart."

The first time Southeast and Austin Peay played on Jan. 3 the Redhawks won 86-84.

Southeast and Murray State played on Jan. 5 at the Show Me Center. The Redhawks led by six points at halftime, but lost 74-66. Murray State, who clinched first place in the OVC West Division with a 106-100 double overtime win over Morehead State on Feb. 20, will be one of the top two seeds in the tournament.

"We want to win these last two games and get some momentum going into the tournament and hopefully that momentum will carry over," Southeast guard Marland Smith said. "We know if we get there we can play well. We've been playing well lately, so we're just trying to get that to carry over." 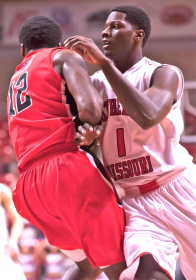 Southeast forward Nino Johnson tries to get past a Ball State player during a game Saturday at the Show Me Center. Photo by Alyssa Brewer

Southeast is looking to redeem itself after an 85-82 loss to Ball State in its ESPN Ramada Worldwide BracketBusters game on Saturday.

The Redhawks led for most of the game, but trailed 77-67 with 1 minute, 33 seconds left in the game.

A free throw by Southeast forward Nino Johnson with 13 seconds left pulled the Redhawks to within three points. He deflected Ball State's inbounds pass and Smith connected with a 3-pointer to tie the game at 82 with seven seconds remaining.

Ball State guard Jauwan Scaife then kept the game from going into overtime when he made a three over Johnson with 1.7 seconds on the clock.

"We did a lot of good things, but at the end of the day we didn't get it done, and that's the thing I'm most disappointed about," Nutt said. "But it doesn't affect our conference. We've got to get our heads up, can't worry about sulking and putting our head down. We've got conference play to play."

The Southeast women's team spoiled any chance it had of making the conference tournament with a 60-57 loss to Jacksonville State on Saturday. It was the first win of the season for Jacksonville State, who is 1-26 and 1-14 in the OVC.

"I think it's still a positive season, I really do," Southeast coach Ty Margenthaler said. "There's some things that I wish that could've gone a little bit better, but I do think that even if we don't make it, with this senior class never making the tournament, and this senior class doing things they have not done, we still have done special things.

"They've never won over 10 games, we've done that. ... There's a lot of positive things taken out of [this season] even if we don't make the tournament, that I'm very pleased with. ... As a second year coach, what I look for is improvement every year and we're definitely doing that."

The Redhawks needed to win their final three OVC games to have a chance to make the tournament. They face Murray State at 5:15 p.m. Saturday in Murray, Ky., in their final game of the season. Southeast's record is 10-17 and 4-10 in OVC play.

"Regardless, it's been a great season and we've accomplished things this year that we haven't in the four years that I've been here, and I really think that we're taking this program to another level and definitely going a step in the right direction, so that's a positive thing regardless of how the year turns out," Southeast guard Bailie Roberts said. "Just being able to be a part of turning a program around is a really positive and exciting thing for me."