The Southeast Missouri State University tennis team has been plagued with injuries and is down to four members for the rest of the season. The fourth and newest addition to the team is former Southeast soccer player Sarah Uptmor.

"We simply needed more numbers to fill out the roster, in case anyone got pulled, due to injuries," Southeast coach Josh Moore said. "I was looking for someone that I thought was athletic and could pick things up quickly and tried out a couple of senior soccer players, and invited Sarah to join the team."

A typical college tennis roster has six to eight members and competes in six singles and three doubles matches at each meet. Since the team is down to four competitors it had to forfeit two matches before meets even began. Moore started at Southeast in September of 2012 and ended up with a short roster because the former coach had not recruited any players. 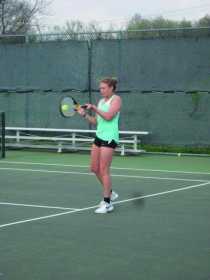 "We had one girl [Melissa Martin] with a shoulder injury at the start of the year," Moore said. "She tried playing through it for awhile, serving underhand, but was unable to continue."

"One girl has such severe shin splints that she had to wrap them every game," Uptmor said. "We had an indoor game against Austin Peay and it really did her in and she was in such severe pain she couldn't even finish the match and compete the next day. She went to the doctor and they think she might have bone fractures in her shin, so she is done."

Moore also had to release one of the original members of the team, Elizabeth Nyenwe, the No. 1 singles on the roster, due to some undisclosed behavioral issues.

"Moore had asked some of the female athletic coaches if anyone had players on their team that had played before," Uptmor said. "Since it was the middle of the season they needed somebody that was already cleared by the NCAA to play. [Assistant soccer coach] Coach Pickering sent out a mass text to all the girls asking if anyone had played tennis before and I thought it was going to be like a fundraiser or something. She gave Moore a couple of our numbers and we set up a tryout and that's how it all started."

Uptmor, along with former soccer player Ali Bauer, set up a tryout with Moore.

"Moore just had us warm up and hit forehands and backhands," Uptmor said. "We worked on volleys and serves for a little bit, also. At the end we played out a few points but nothing extremely intense. The next day coach called me and we set up a meeting in which he offered me a spot on the team."

Uptmor had played high school tennis for one year and besides that just played for fun.

"I like playing sports and didn't see a reason not to, and anytime I can help out a fellow Redhawk team, why not?" Uptmor said.

The team has been accepting and patient with Uptmor.

"They always encourage me to keep trying even when I have terrible matches or practices," Uptmor said. "They also have had to remind and teach me tennis etiquette, like not cheering during point play."

"We are really blessed that she was able to join us, and her enthusiasm, work ethic and dedication to improving have really shown and made a difference on the team," Moore said. "She was just voted 'Most Inspirational' by her teammates."

Uptmor did not win any matches but won individual games and sets within matches.

Southeast won its first Ohio Valley Conference meet against Tennessee State on Saturday and lost its final meet to Belmont on Sunday. The Redhawks finished 4-11 and 1-9 in the OVC.