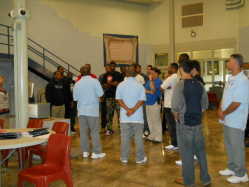 Being a college athlete can mean a number of things, like waking up at 5 a.m. for weights, long nights of sweaty practices and pressure to win games.

It can also mean an increase of attention on campus from other students as well as throughout the community.

But aside from all of the fame and glory that may come with being an athlete, it can also mean an increase of temptation. This year Southeast Missouri State University men's basketball coach Dickey Nutt wanted to educate the Southeast basketball players about the consequences of giving into temptation and how making one bad decision can change one's life forever. 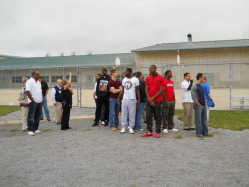 In the past four years, Nutt always has organized some type of team bonding event before the season starts. The event usually includes a field trip of some sort or a dinner, but this time Nutt had a different plan for the team.

With the help of his friend and Southeast criminal justice professor and coordinator of the on-campus master's program, Dr. John Wade, Nutt arranged for the team to travel to the Southeast Correctional Facility in Charleston, Mo.

When Nutt explained to the team what they would be doing this season, he said he didn't have a lot of positive reactions. According to Nutt, some snickered and thought it was a joke.

"I didn't understand why we were going," point guard Lucas Nutt said.

But the team traveled 45 minutes south of Cape Girardeau and arrived to a complex that houses about 1,500 men.

Each player, coach Nutt and two Southeast instructors had to undergo background checks as well as go through security clearance to ensure that everyone participating in the tour did not have any outstanding warrants or immediate family members in the facility before they could enter the premises.

The team was briefed on the prison and the fact that the facility is a level five prison, which means it is a maximum level security prison.

The group went to the administrative segregation, which is a housing unit where the inmates are kept away from the general population. The facility is divided into six housing units. In the One House, inmates are kept in a single cell. This may be because they have a disability issue or they are on psychological watch.

Forward Tyler Stone said that the rooms were small, weren't clean and that the building didn't smell good.

The people in Two House are on lockdown most of the time, and when they are allowed outside of their cell, the rest of the facility goes into a lockdown mode. The inmates that reside in Two House are some of the "the worst of the worst," according to Krieger, or they might be in protective custody because they are in a gang or owe someone money. Most of the lockdowns for the inmates last between 10 and 40 days.

"That was pretty tough being in Two House when they were yelling about what they wanted to do to you sexually," Wade said.

According to Krieger, the inmates advance in the houses based on behavior. Six House is the honor house, and any inmate that is on an honor status is allowed to participate in Puppies for Parole. The program, which was developed by the Missouri Department of Corrections, gives the inmates dogs from the Safe Harbor animal shelter in Jackson, Mo., to train. The dogs live in the cell with the inmate, and they teach them basic commands as well as train them to run a course that is on the prison grounds until they are adopted.

"It's very therapeutic for the inmates," Krieger said. "They establish these relationships with the dog, almost like their children. They learn to care for something, someone."

The staff explained to the team that those who are on honor status can be involved in the Intensive Therapeutic Community. The program initially sparked coach Nutt's interest because it focuses on mutual accountability, teamwork, cohesiveness, sound decision-making and surrounding oneself with positive people, much like qualities that he wants his players to have now and after they've completed life as a college athlete.

"It's not all about basketball," Nutt said. "Sooner or later you're gonna be a productive or nonproductive citizen in our country. [The players] do what they can, learn and maybe one day be a productive man, husband."

In addition to a preview of the prison library and recreation center, the team learned about the Restority of Justice. According to Wade, it's a program designed to help inmates give back in different ways since they are usually prohibited by law to contact their victims.

The inmates give away vegetables from their garden, make coloring books for kids and cards for senior citizens as well as make baby blankets.

"It's kind of a life lesson," Wade said. "It isn't all just running up and down the court shooting baskets all the time. There's a lot of conflict and a lot of problems out there, too."

The team also had the opportunity to talk to multiple inmates, including one who was was a 6-foot-9 inch high school basketball star before he ended up in prison.

"We were just touched. Thankful to be fortunate enough to be out here," Stone said.

Both Lucas Nutt and Stone were reluctant to share what the man did to result in his imprisonment, but they said that the inmate described how his life took a turn for the worse when he started hanging out with the wrong type of people and made one bad decision that ended his career. According to Stone, players thought it was surreal to talk to the inmates since they are all going to be in the prison for at least 12 years, and some of the people said that they had been convicted of murder.

"[They] were quick to reassure us not to be in there," Stone said.

Once the four-hour tour concluded, Nutt took the team to a dinner at Lambert's in Sikeston, Mo., where he said a lot of the players opened up about their experience and the effect it had on them.

"I'm really proud of the way our guys handled it," Nutt said.

With the new season ready to begin and high expectations to win the Ohio Valley Conference, Nutt believes that his team-bonding trip inspired the team to make good decisions on and off the court as well as encouraged his players to work together.

"We're talented as long as everyone stays healthy and together," Lucas Nutt said.