Paul McRoberts steps onto the basketball court this year 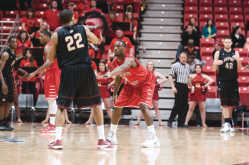 McRoberts played in all 12 games during the football season and led all wide receivers with nine touchdowns, 646 receiving yards and a team-high average of 14.7 yards per catch.

McRoberts averaged 53.8 yards per game for a team that often struggled to gain yards through the air and led the team with 54 points scored over the course of the season.

The St. Louis native was recruited by both Southeast men's basketball coach Dickie Nutt and former football coach Tony Samuel. McRoberts agreed to be a two-sport athlete when he declared for Southeast, but did not play on the basketball team his freshman season.

"We recruited him out of high school and we made a deal with him and his family that he would come here and play both sports, but for whatever reason it didn't work out the first year," Nutt said. "He called us up the second year and I told him, 'You have an open invitation.'"

McRoberts' athletic ability was apparent through football, but there is another characteristic that Nutt and McRoberts' basketball teammates noticed as soon as he stepped onto the court. 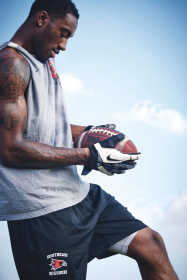 "I love football players because they have a certain toughness from being hit on every play, but here is a guy who is very skilled basketball-wise who brings that toughness with him from football and on top of all that he is a great character and person who has already made his presence known," Nutt said.

Jamaal Calvin, a freshman on the basketball team, noticed a few intangibles that McRoberts has brought to the team.

"His mental toughness is something I noticed right away but also his physical toughness," Calvin said. "I mean, when he goes out there and plays defense he brings that extra spark, which feeds into the rest of the team."

Student athletes who participate in more than one sport adjust to multiple factors as they go from team to team. Those adjustments can be a new workout, new schemes or new teammates, but McRoberts is adjusting to another factor that could be a difficult one. McRoberts went from being the No. 1 go-to guy on offense with the football team to contributing when he can off the bench as a role player primarily known for his defense on the basketball team.

"I was actually talking with my family about the difference the other day, about always being on the field to now only being able to help out when I can get on the floor, but it is definitely something I have adapted to and look forward to keep playing," McRoberts said.

McRoberts had his best game of the season on Jan. 18 against Ohio Valley Conference foe Tennessee Tech with a total of 16 points, five rebounds, two blocks, one assist and one steal.

McRoberts also spent the most time on the court when he played 29 minutes against Tennessee Tech. Southeast went on to win the game against the Golden Eagles, who were 7-1 at home going into the game against Southeast.

"In what he [McRoberts] did in that game at Tennessee Tech, I think that is only the beginning," Calvin said. "He is just now coming out of his shell, and I think he is going to be very big for us."

McRoberts said that it's not the differences he noticed between the football program and the basketball team but the similarities that have stuck out to him.

"I see a similarity more than a difference," McRoberts said. "Both teams appreciate me and love me and I appreciate them just as much. Both teams are hardworking and dedicated to what we do."