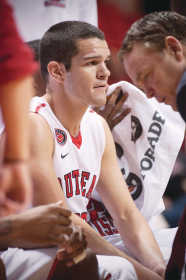 The previous holder of the record, Dwayne Rutherford, set the record in 1990 with 541 assists. Twenty-four years later, Nutt broke the record against in-state rival University of Missouri-Kansas City. He had 11 assists to give him 543 after the win against UMKC.

"Man, it is awesome feeling to break a record anywhere is just awesome," Lucas Nutt said. "I just give a lot of credit to my teammates who have helped me do it."

Nutt has been with the Redhawks for the past five years, beginning with the 2009 season. After he suffered a broken foot injury nine games into the 2009 season, Nutt was granted a medical redshirt. 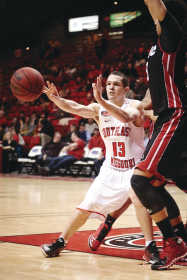 Lucas Nutt, shown from a game earlier this season, broke the school record of 541 assists. Photo by Alyssa Brewer

"The assist record in my opinion is one of the most prestigious categories because it exemplifies total unselfishness," Dickey Nutt said. "We are all very proud of Lucas."

The milestone was not the only one the Nutt family had to celebrate on Jan. 29. With the help of his son and the rest of the Redhawks, Dickey Nutt won his 250th career game as an NCAA Division I head coach.

"I'm quick to tell you that I never made a shot or scored a point over this time. I feel very fortunate to be able to do what I love to do over all these years," Dickey Nutt said.

Stone transferred to Southeast from the University of Missouri after the 2009-2010 season and has played alongside Nutt ever since.

"It was a good feeling since we have been through so much," Stone said. "We just want to keep adding to those wins."

Both Stone and Nutt spoke about how their friendship has helped them on the court.

"I love Tyler," Lucas Nutt said. "I know I definitely couldn't have done it without him, and him and I just know each other out there on the court so well, like we read each other's mind."

Southeast wasn't quite done with making Southeast history in the game against UMKC on Jan. 29. With the victory over the UMKC Kangaroos, Southeast finished its non-conference play for the season with a record of 9-5. Those nine wins were the most non-conference wins for a Southeast team since it became a part of Division I play.

The remarkable thing about the team's achievements in the UMKC game is that it were able to do so without leading scorer Jarekious Bradley. Bradley, who had a sprained knee, saw limited minutes after aggravating his knee injury just two minutes into the first half.

"I am very proud of a good non-conference record," Dickey Nutt said. "We just need to claw our way back in the conference standings," coach Nutt said.

Southeast now has an overall record of 12-11 with a record of 3-6 in the OVC. The team's next game is against OVC opponent SIU Edwardsville on Thursday. Currently, Southeast stands at fifth in the West Division of the conference. There are two six-team divisions and only the top eight teams will make the OVC tournament.