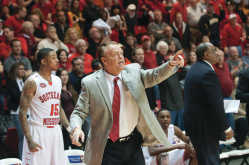 Southeast Missouri State University men's basketball coach Dickey Nutt has received a new contract extension that runs through the 2016-17 season according to a press release issued on April 9.

His previous contract was going to end after next season but director of athletics Mark Alnutt and the Southeast administration decided that with all of the things Nutt has accomplished over the last five years with the program, it was time to extend his contract.

"It was very easy [giving Nutt a new contract] and that just goes back to looking at what he has accomplished here in the five years that he has been here," Alnutt said. "Just look at the trajectory of the program in terms of winning seasons and having back-to-back winning seasons for the first time in 13 years was a key indicator. We've been competitive in the OVC, naturally we want to continue to climb that ladder in the OVC. But to be in the tournament four straight years, I mean that's a good accomplishment."

Nutt led Southeast to the Ohio Valley Conference Tournament quarterfinals and its second straight winning season with a record of 18-14 last season.

Southeast earned the No. 6 seed in the tournament last season and lost to third seed Eastern Kentucky 84-76.

Eastern Kentucky went on to win the OVC Tournament Championship by defeating No. 1seed Belmont.

Nutt first led the Redhawks to the OVC Tournament in 2011 season, a place they had not been since 2006.

The Redhawks lost all four quarterfinal games they have played in the OVC Tournament, but have improved their record each year under Nutt and return three starters next season.

Nutt said that he thinks that returning three starters is the thing that he and his team are most encouraged by going into the offseason.

"A lot of times after four or five years of building a program, you unload a lot of seniors," Nutt said. "Maybe five, six, seven seniors in one year, but that wasn't the case after our fifth year. We only lost two guys for next year's team. We feel like our experience is coming back, and we've got a chance to be very competitive next year, very good. So we're looking forward to next year and we've got a good start with the returning guys that we have."

"Naturally that feels good," Nutt said. "Because you've got a chance to get a guy like Jarekious Bradley that's probably talked about around the league as one of the best players in the league and rightfully so, he's earned that right. I think he will be even better next year with a good spring and summer."

Bradley was named to the OVC All-Newcomer Team and second team All-OVC as he led the Redhawks in scoring with 19.0 points per game that were accompanied by 6.3 rebounds per game.

"Right now he is battling some injuries, but when he's healed up and ready to go I think you're going to see an even better player next year," Nutt said. "Then you've got a guy like Nino Johnson that has a chance to be one of the best big guys in the league and so we feel good about him. Although he didn't have the year we expected him to have, but he still did some good things. When he put his mind to it he has been one of the best players in the league. We're glad to have those two."

Johnson started in 21 games each for Southeast last season along with Cleveland and they both averaged more than 8.0 points per game.

Looking to fill in a starting role for the Redhawks next season will be Auburn transfer Josh Langford, who played in 22 games last season and averaged 18.9 minutes per game.

"You look at a guy like Josh Langford that is kind of basically the wild card in our team," Nutt said. "If you asked anybody on our team, they would probably say he is the best athlete on our team. So I think he has a chance to be good."

With these kind of players returning for Southeast, Nutt and his team will be looking to improve on their 8-8 OVC record.

"I think experience is going to play a role in our team and having the majority of our team back for next year versus this year where we only had three guys that had played Division I basketball before the season started," Nutt said. "So it's going to be different next year, I think we have a chance to be pretty good."