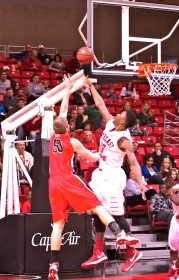 In front of representatives from every team in the National Basketball Association, Stone played in three games for a total of 93 minutes and scored 41 points that were accompanied by 18 rebounds.

He was ranked as the No. 1 NBA Prospect by NetScout Basketball.com following th event.

"Being rated No. 1 on the Portsmouth NBA prospect list actually blew my mind," Stone said. "There were a lot of good players who played very well and to be rated No. 1 was a good feeling. I just played as hard as I could and tried to make a difference defensively and the rest took care of itself. I'm just taking what I learned at SEMO and putting it all together."

The PIT has invited the top 64 seniors to play in a 12-game tournament for the past 60 years. The players are watched by scouts, general managers and representatives from each NBA team.

Each player is placed on a team along with seven other seniors and they compete in a total of three games that are scheduled across the four-day event.

"We're really proud of Tyler to be able to, not only be invited, but to play so well in a very prestigious camp," Southeast coach Dickey Nutt said. "We're so proud of his accomplishments and his improvement and his development over the years."

"It was an honor," Stone said. "To be recognized as one of the top seniors in the country was a great feeling. Being invited really had me really excited to showcase my skills. Being able to go on a national stage and represent my school was a one-of-a-kind feeling."

In the first game, Stone played for a team-high 32 minutes and had13 points, six rebounds and three blocks to help lead his team to a 77-74 victory over the Portsmouth Sports Club team.

At midnight, Stone gave Nutt a call and Nutt asked him what his schedule would be for the next day.

Nutt went on to explain about how he asked Stone if he knew how to show up to that meeting and Stone replied, "Yes, sir, coach. No flip flops, no headset."

"That made my heart feel good because just maybe he has taken something that he has learned here and put it to work," Nutt said. "I had calls from agents and supervisors telling me that he was not only the best player there, but he was the sharpest-looking guy there."

Stone's team lost its second game against the Norfolk Sports Club 88-67. Stone only played for 26 minutes and scored six points to go along with five rebounds.

On the final day and game of the tournament for Stone, he played for 35 minutes and led the team in scoring with 22. It would not be enough, though, and they lost 97-83 to Portsmouth Partnership.

Stone was named the OVC Preseason Player of the Year before his final year as a Redhawk began and he averaged 19.3 points per game and ranked fourth in the conference with rebounds as he averaged 9.5 per game.

Stone finished his career as a Redhawk with a total of 1,546 points and 768 rebounds in his three seasons as a starter for Southeast.

Before those accomplishments, Stone went through some "hard knocks" as Nutt explained and got thrown out of three practices in the beginning of his career at Southeast.

"In the first six weeks I think he was thrown out of two practices and on the third one I asked him to pack his bags and go to Memphis, that he would never play here because of attitude, just because of effort," Nutt said. "When he asked for that third chance, from that day forward, I saw his life change for the better."

In the last two out of three seasons that Stone has been on the team the Redhawks have had a winning record and Nutt explained that Stone was a big part of that.

"That young man has turned into an outstanding person," Nutt said. "I'm very proud to see that he's being recognized for it. I think he's going to make a lot of money being a professional basketball player, and that's the thing that we're capitalizing on in our recruiting."