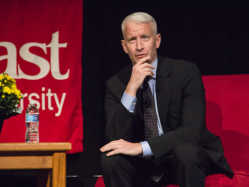 Anderson Cooper visited Southeast on Sunday and spoke about his life and past experiences he has had throughout his career as a journalist. (Photo by Zarah Laurence)

Cape Girardeau residents, students and visiting families gathered at the Show Me Center on Sunday to hear CNN news correspondent Anderson Cooper speak on current world events, his journey to CNN and even about some life lessons from his mother.

Anderson began his presentation by discussing if he is ever intimidated by the caliber of people which he interviews.

"Not really," Cooper said. "What's interesting about very powerful people or celebrities is that they're a lot less interesting than I think they're going to be. So when I meet them I think 'Wow, you're just as big of a loser as I am.'"

Cooper then went on to talk about his experience interviewing President Barack Obama.

"Obviously when you interview someone like the president of the United States it is hard not to be intimidated by the trappings of the oval office, but your job is to not be intimidated. Your job is to put all of that aside and try to get the guy to answer questions," Cooper said.

He mentioned that the president keeps the oval office extremely hot and while he was interviewing he began to sweat profusely while the president stayed cool.

Cooper then discussed the journey he took to get to where he is today. He attended Yale University, where he earned his degree in political science.

He said that his inability to decide led him to ask advice from his mother, famous New York socialite and actress Gloria Vanderbilt.

"One of the only other times I asked her for advice was when I was going to a job interview to be a waiter in high school and I asked her, 'What do you think I should do to prepare for this job interview?'" Cooper said. "She thought about it and then said to me, 'Wear vertical stripes because they're slimming.'"

While Cooper said that his mother was not the most practical when it came to giving advice, he did mention the great advice she had given him when it came to discovering what is was he wanted to do with his life.

"She told me to follow my bliss," Cooper said. "Which, by the way, isn't an original saying. My mother had been watching TV and saw Bill Moyer during an interview, who coined this term 'Follow your bliss.' So I am thankful she wasn't watching 'Maury' when I asked her because she may have just told me to get a DNA test."

He spent much of his college career studying communism and international relations and said that when the Berlin Wall fell, he felt as if his studies had been a waste and he felt lost when it came to deciding where to go regarding his career.

Then upon graduation, being unable to find a job, he decided to travel to Africa where he began covering conflicts that were happening there, all through the lense of a hand-held camera.

"I knew I wanted to go to places, and I had read a lot about war correspondents and decided that I wanted to be one," Cooper said. "I couldn't get an entry-level job after school, so I came up with this scheme that I'm just going to go to wars by myself and I'll become a war correspondent because I believe a lot of life is just showing up."

Cooper shared some of the experiences he had during his first few years as a freelance journalist -- from sneaking into Burma during uprisings against the government to traveling to Somalia and experiencing famine and even traveling to Rwanda during the genocides that took place there. Cooper said that those experiences led him to find his bliss in war correspondence.

Cooper said that he has faced many dangerous situations while covering stories and recalled one instance of being forced to hire child soldiers in Africa to act as his body guards.

"When I landed in Baidoa, a town in Somalia, a group of kids came up to me with AK47s and offered me their services and made me an offer that I really couldn't refuse because they pretty much said hire us or we'll shoot you," Cooper said. "So I hired them. I was actually more scared of them than anyone else around me, but we had no other choice."

Cooper, however, used the situation to his advantage and was eventually able to ask the children to hold the camera while he was covering stories.

He also recalled the confrontation he faced in Egypt during the riots taking place due to former president Hosni Mubarak.

"They were pretty much telling people to attack journalists, so we made it about three blocks when the crowd turned on us. I don't know if you've been punched in the head a lot, but it really sucks," Cooper said. "We were mainly trying to protect our producer because they were trying to tear off her shirt and her pants, and we were very lucky because a man behind us was actually stabbed in the back with a screwdriver. I have been shot at but have never had a mob turn on me. It made me much more aware of how quickly things can change."

Cooper then addressed various issues that have been facing the United States and the rest of the world, like the kidnapping and beheading of journalists, which Cooper admitted he fears. He said that it will not stop him from doing what he does, but it does make him more cautious.

The incidents in Ferguson, Missouri, and how they were covered by the media were discussed.

"It is always difficult to cover stories that have huge media coverage," Cooper said. "Anytime there's a large media presence I am very aware of the cameras. I am glad there were cameras there and that we were able to show people in various places what was happening there on a daily basis."

He also spoke about the demonstrations and the police response.

"I think that one of the reason it became such a story of interest to people around the world was because of the response to the killing, both by the local police force, which I don't think had a lot of experience dealing with a situation like that," Cooper said. "It is rare in the United States to see sniper rifles aimed at unarmed protesters. I don't know how many have had that happen but it changes the way you see things if you're a peaceful protestor. You can't help but feel that that person is not here for my safety or to serve and protect."

"A friend of mine asked me to go with him," Avery said. "Honestly, I am really glad that I went. It was very interesting and I honestly expected him to be really biased when it came to his opinions on certain things, but he wasn't at all."