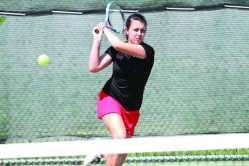 Melissa Martin competing in a match from last season.

Southeast Missouri State University's tennis team began its fall season with performances that indicate that youth is an aspect that has its ups and downs.

This will be a season of growth, learning and working to perfect each other's craft.

"We are a young team, but we are looking forward to go out there compete and learn how to compete at a collegiate level and hopefully have a good season," Killen said.

"Mariya has one of our best records on the team and Katie has showed a lot of improvement on the court especially in doubles," Killen said.

Killen added that Martin has been assigned the role of captain, is learning to fulfill her role as a leader and has been a reliable source of communication to all the players on the team.

Other team goals during this fall season based off the team's play in the recent tournaments include making sure players display their best effort and do well against every opponent they play.

"Doubles is something we are really looking to improve on, we are looking to work on our volleys and really poach more and put balls away," Killen said. "That was on the improvement list for the season and in particular be more aggressive and make sure to remain consistent."

With the beginning of the fall season being positive and successful for Kostyuk with her having a current singles record of 6-1, consistency and growth overall are two essential components to focus on throughout fall play and into the spring season.

"I am happy with my performance so far," Kostyuk said. "But I feel that I have areas I can improve on in order to make sure I am ready for the upcoming spring season."

"I think we have a lot of potential and we are looking forward to a great season," Kostyuk said.

The tennis team's next match and final match for the fall season is scheduled for Nov. 7-8 in Jonesboro, Arkansas, at the Arkansas State Invitational.