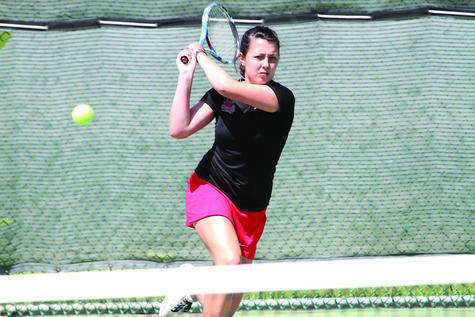 Senior Melissa Martin returns as the lone senior on this year's team and is 1-1 in her matches thus far. File photo

If there is one thing that the Southeast Missouri State women's tennis team wants to focus on this season, it's that the coach and players want to give it their all in practices and matches.

"I want the student-athletes to give 100 percent all the time on the court and off," second-year coach Leah Killen said. "I want them to be aggressive and show what they can do."

Kostyuk and freshman Viviana Ortiz won the only doubles for the Redhawks' match victory.

On Saturday, the team traveled to Wright State where Southeast fell 7-0.

Kostyuk was the only member of the team that won a set in her match.

Killen guided the team to a 9-13 record overall in her first season as the coach. The nine victories were the most the Redhawks had won since 2006-07.

Each of these players showed promise in the fall season with Kostyuk having a team-best singles record at 6-1.

Warasanti, Martin and Brady round out the rest of the roster.

Martin, the lone senior and also captain of the team, is tied for second on the team with 14 singles victories.

Killen looks for her to be a big influence on the younger players with her experience that won her the team Most Valuable Player award last season.

"Melissa has really stepped up as a leader this season and someone the student-athletes can look up to," Killen said.

Brady, a co-captain, is looking to show the players how to grow together as a team as she tries to be a mentor to the younger players.

Out of the eight players on the team, seven come from outside of the United States.

Killen believes this leads to more comaraderie and creates a stronger team bond.

"We have a very diverse group this season," Killen said. "We have different cultures and different ways of doing things, which has brought us together as more of family. I feel that they all can learn from each other and build a good team dynamic."

Several players on the team were successful in singles competition last season, but Killen wants to see the team compete as well in doubles matches.

Warassanti, Brady and Martin combined for about 40 percent of the team's singles victories and Killen feels that this trend can continue.

"I think the student-athletes are confident in singles and are able to dictate points and play aggressively," Killen said.

The team's goal for the year is simple -- play hard.

"We want to be known as a team that never gives up," Killen said. "We want our opponents to have to work and run to get balls back into play and make them play another point."

The Redhawks' main goal for the season is to be one of the five Ohio Valley Conference teams to make the tournament at the end of the season.

The Redhawks also strive to give their all on the court.

"I want to get to the tournament but also strive to be the best I can be on the court every time," Stoianova said. "Our team is well prepared and we work hard."

"I want to do the best I can every time and get to the OVC tournament," Kostyuk said.

"I want the girls to fight hard in every match and we will see what happens," Killen said.

Southeast will travel south to Jonesboro, Arkansas to face Arkansas State (0-3) on Friday and will then go to Conway, Arkansas to play Central Arkansas (2-0).