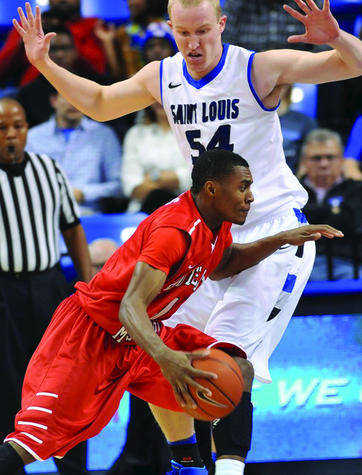 Stick around long enough after a Southeast Missouri State men's basketball game, and there is a 100 percent chance that 6-foot-3 senior guard/forward Caleb Woods will be shooting baskets.

Woods isn't the star of the team. In fact, he rarely sees playing time. But that doesn't stop him from coming out after every home game and putting up shots.

It all boils down to the fire of Woods' work ethic, which he said was sparked by a couple of girls when he was in the sixth grade.

"I was playing in the backyard with a group of friends, and there were some girls there, they were saying I was sorry," Woods said. "I took it to heart, and said, 'OK, when I go pro,' that was the dream, 'When I go pro, then you all won't be saying anything.' And it just took off from there."

In junior high, Woods played football and basketball, but when high school rolled around, his mother encouraged him to choose one sport, and Woods turned his focus to basketball.

After high school, Woods attended Dyersburg State Community College, where he averaged nearly 12 points per game and started all but one game during his sophomore year.

Woods said that he played in a game at Sikeston, where then Southeast assistant coach Jon Cremins showed interest in him.

"I asked my head coach, 'What did he say?' and he said, 'They might be looking at you,'" Woods said. "I didn't have any offers coming out of Dyersburg State, so I was writing to see what could happen."

Woods sent a letter to Southeast, and Cremins wrote him back, explaining that Southeast didn't have a scholarship for him. However, Woods had already made up his mind to attend Southeast.

"I stayed in touch with the assistant coach, and he gave me another workout, and I ended up getting on the team," Woods said. "Work ethic pays off."

Woods doesn't fill a stat sheet. He has had a different effect on the team the past two seasons as a Redhawk.

"Ever since I was a freshman in high school, I was the type of person to lead," Woods said. "It just came out of nowhere. 'Let's go y'all. Let's do this, let's do that.' It's always been there."

Southeast coach Dickey Nutt agrees that Woods is a leader.

"He's a vocal leader," Nutt said. "He brings it every day. He has the best passion, the best attitude that a coach could ever have. He makes sure that everybody is on time, he certainly counsels the young guys. His work ethic is unbelievable. He's got a heart as big as anybody on this team."

Nutt added that in times when frustration sets in, Woods serves as "the connector to our staff. If we ever need anything to be passed on to our team, we try to get it through him."

"If they're [teammates] looking down, I'm in their ear, just another person to help them out," Woods said. "My mindset is 'just want to win,' I want to help my teammates. I'm going to be that person always cheering on my teammates, persevering through the hard times."

"Persevere is one of my favorite words," Woods said. "When things aren't going right, you persevere. You get back up. It's not over. You still have to live life. You have to keep fighting."

Woods used basketball as a release when he was going through difficult times.

"If I was going through life struggles, or had some things on my mind, I would just go to the gym, late nights or whenever," Woods said.

During his junior season at Southeast, Woods began shooting baskets after every home game, all in an effort to get better.

"I just go to the gym, try to get better, and I bring it into practice to make them [teammates] better," Woods said.

Woods doesn't leave his work ethic behind when he leaves the gym. He is set to graduate in May 2016 with a degree in exercise science.

"Caleb is the ultimate student-athlete," Nutt said. "His character is phenomenal."

Woods said the work ethic that has been cultivated by basketball all these years will "open a lot of doors. I'm going to keep doing what I'm doing. Hopefully a lot of people will see that."