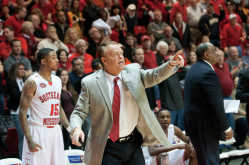 On Monday, both the men's and women's basketball programs at Southeast Missouri State University lost its coach.

Nutt was effectively relieved of his duties today and Margenthaler resigned from his position on Friday, according to director of athletics Mark Alnutt. 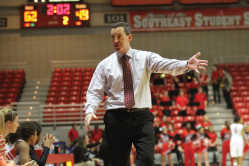 The team was not notified of Margenthaler's decision until this week after Spring Break because Alnutt and Margenthaler wanted the chance to notify the team in person about the resignation when everyone was available.

"The first thing we want is an opportunity for both coaches and myself to talk to the team about it," Alnutt said. "With Spring Break happening last week the teams were gone, so one thing that we didn't want to have happen is whether texting or calling the team members, maybe not getting everybody and then hearing it via social media or whatever the case might be, we didn't feel that was the right thing to do."

Due to other factors such as the weather and the passing of Alnutt's mother-in-law, Amelia Joanne Hankins, on March 10, Alnutt did not have the opportunity to sit down and do his typical end of the year evaluations to be in the position to deal with this earlier.

The decision to let go of Nutt was based on the fact that he did not meet the expectations that he and Alnutt mutually agreed on, Alnutt said.

Alnutt felt that it was time for a change and he had his end of the year meeting with Nutt two weeks ago prior to Alnutt leaving for his mother-in-law's funeral where he told him he would let him know what his decision was going to be after that and after Spring Break.

Before talking about the decision on Nutt's job, the two talked about the expectations that were not met, but Alnutt also wanted to hear Nutt's plans on how he was going to elevate the program for the future.

"You have that discussion with the coach about what the coaches' vision was for next year and we have some really good student-athletes in place, a good nucleus in place of young people," Alnutt said. "But still at the end of the day I just was not sold in terms of, 'Do we have what it takes to climb the standings in the OVC [Ohio Valley Conference] or will we be where we have been the last few years?'"

Prior to this last season, the men's basketball team had made it past the first round of the OVC Tournament but lost in the quarterfinals for four straight seasons.

This year the team made it to conference tournament once again by securing the eighth and final seed but lost in the first round.

"Obviously I commend Coach Nutt for the job that he has done inheriting the program that he inherited, and at least got to the point where we were a few years back," Alnutt said. "In terms of actually looking at it and looking at expectations, especially year six of a program, just more importantly from an OVC standpoint you go back to the two winning seasons that we've had the last two years, but from an OVC standpoint we just fell flat. Actually we've even regressed the last two years from what we did three years ago."

Alnutt said that Margenthaler's position security was very similar to Nutt's in the fact that he did not meet the mutually agreed upon expectations.

In the four years that Margenthaler has been the women's basketball coach, the team never made it to the OVC Tournament.

Prior to the beginning of the season, Margenthaler violated the athletic department's policies and procedures and was suspended for the first two games of the season.

"I look at this as the fact that at that time it was a self-imposed discipline that we did and we felt that possibly would have been it, but it wasn't the best start obviously to the season to be disciplined based on a potential major infractions case," Alnutt said. "So again that does have a little bit to bear on it, but I think at the end of the day when you put the NCAA stuff aside and just look at again where both of us expected to be this year and where we actually are was really the main concern."

The women's basketball program has been being investigated by the NCAA since August and Alnutt said that hopefully there will be resolution or at least some direction on what the direction will be very soon.

Alnutt said that the NCAA's pending investigation played a big role in whether or not Margenthaler resigned or remained as the team's coach through it.

Alnutt went on to say that it was the best choice for Margenthaler to resign simply because they don't know what the NCAA is going to come back with and how severe the penalties will be.

Alnutt said that the search for both coaching positions has not quite begun just yet, but that the position is going to be posted shortly and he expects it to be out Tuesday at the latest.

"And that will give me the opportunity to at least start gathering information, talking to people, talking to my counterparts, talking to folks that I indirectly, directly know of potential candidates," Alnutt said. "What I'm looking for is obviously someone who is very familiar with this area, familiar with this region. When I say region, you take Cape Girardeau and just draw a six-hour radius from there."

Alnutt will treat whomever the two new coaches are like the hiring of football coach Tom Matukewicz and baseball coach Steve Bieser first season, as he said he did not evaluate their first year in terms of wins and losses, but the stability of the programs.

Alnutt is looking for someone who is familiar with the region, the OVC and how Southeast operates in its league to come in and coach one of these basketball programs.

"But I feel that when you find that person it's all about fit," Alnutt said. "And that person does fit that mode and also fits my mission for the department of athletics, which is stressing the student-athlete. Students first. Academic excellence, social development and then competitive success are our three core values. So once we find that person, hopefully we find that person within the next four to five weeks and then we'll be able to move on."

Alnutt said that he expects there to be two new faces in Southeast's basketball programs by the end of April.