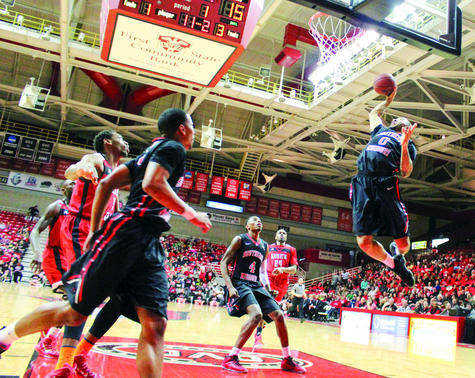 "Disappointing" was how coach Dickey Nutt and several Southeast Missouri State men's basketball players summed up their season that ended with a loss in the first round of the Ohio Valley Conference Tournament.

Like any other team, Southeast had aspirations of earning a first-round bye in the conference tournament by finishing as one of the top teams in conference in the regular season.

The Redhawks fell short of their preseason goal by finishing eighth in the OVC with a 7-9 record and ended up playing fifth-seeded Morehead State in the first round of the conference's tournament.

Southeast lost 79-74 against Morehead State in a game that included 17 lead changes on March 4 to end its season in Nashville, Tennessee.

"I felt like expectations were certainly higher than where we finished and I think our team is all in agreement to that," Nutt said. "Everything that could have happened to our team seemed like it happened to it. Everything from injuries to lack of chemistry and I do feel like we had some good moments, but not nearly good enough and as a result we're disappointed in that."

Nutt stated that there are a variety of reasons that can be looked at as to why the team did not meet expectations and one of them was injuries.

"Jarekious Bradley having a wrist surgery this summer and then a contusion in his thigh to miss the first few games and we never really could get in sync," Nutt said. "The inconsistency of our frontline play was a serious factor for us. Nino Johnson had a good year for us but not as consistent as we wanted to play. So with all that being said we just feel that it was a disappointing season for us. Although, there were certainly some good spots and some good things that have happened."

Bradley only missed four games due to injury and started 18 of them, but came off the bench in his last seven games as a Redhawk.

"The reason was he got hurt, and it put him out of a game," Nutt said. "It kind of took some pressure off of him a little bit and he even said it himself, he said, 'I feel a lot more comfortable coming off the bench after the game gets started for three or four minutes.' So we just kind of kept it that way because that was kind of more comfort zone for him and it kind of took the pressure off him."

Nutt added that former Southeast player Tyler Stone got much of the attention defensively from other team's last season and that Bradley was able to quietly average 19.0 points per game.

"Well this year Jarekious had all of the accolades," Nutt said. "He had all of the respect and in every game they [opposing teams] were throwing two people at him and making sure that he's shut off and not getting touches and not getting the ball, and that's very frustrating. He came back off injuries and he wasn't 100 percent so then he's up and down, so he became very frustrated."

Nutt and the staff spent the majority of the year telling Bradley to not put so much pressure on himself and to just let the game come to him.

"'Be the best defensive player you can be, be the best rebounder, be the best teammate you can be,'" Nutt said he and the staff told Bradley. "All of those things play a big role in the name of pressure and sometimes it's new to people, and that's exactly what it was. But when we started making some changes, and he was hurt so it made it easy, we brought him off the bench and we became a better team and he was starting to play better coming off the bench so we just kind of left it that way for the rest of the season."

Bradley led the team in scoring by averaging 16.2 points per game and also surpassed 1,000 points for his two-year career at Southeast by finishing with 1,029.

Nutt specifically mentioned some younger players on Southeast that emerged this season as "star players" and the first one that he mentioned was sophomore guard Antonius Cleveland.

"He's one of my all-time favorite players, and he's only been with me for two years," Nutt said. "But I can honestly say that because here's a guy that wants to please, here's a guy that came into our program about 6-4 and today he's 6 foot 6 and a half and just got better and better. He couldn't hardly dunk a basketball when he came here and today he just almost touches the top of the backboard. He's such a sponge that he wants to learn and he wants to please his coach and you just love that about a player. He's the guy that's going to lead our team next year."

One of Cleveland's dunks this season was featured on SportsCenter's Top 10 plays for his one-handed slam against Murray State on Feb. 14 in a 94-92 overtime loss at the Show Me Center.

Another young player that Nutt mentioned emerged on this team was freshman guard Marcus Wallace, who came on late in the year.

"Marcus Wallace really came on to be, in my opinion, the best freshmen in the league, especially in the last 10 to 12 games," Nutt said. "Now very early on he was very much like our entire team, our shooting percentages were not very good and he was a 50 percent free-throw shooter. In the last 10 games he got close to 80 percent free-throw shooting."

"My main focus was to show them that I should be playing in practice," Wallace said. "I just came out in practice every day doing the best that I can and do what I usually do and show them why I should be on the floor."

The first time Wallace scored 10-plus points in a game was against Harris-Stowe on Dec. 28 when he played for 28 minutes coming off the bench and scored 11 points in a 94-66 win.

On Feb. 7, Southeast defeated Eastern Illinois 68-64 at home with the help of Wallace, who played a then season-high 31 minutes and took full advantage of that opportunity by scoring a team-high 18 points.

Wallace started Southeast's final two games of the season and combined for 17 points and 11 assists.

"Our fans really enjoy watching guys like Marcus Wallace who come on and grow as freshmen just like Antonius Cleveland," Nutt said. "I think the future is very, very bright for those guys."

Wallace said that he is ready to take on his new role, which he said is to kind of run the show and be the quarterback of the basketball team.

"Whatever it is, getting the team together, running the offense, keeping our minds right in the games and being the true point guard -- I think taking on that role is going to be a challenge," Wallace said. "I think I'll live up to the challenges and do just fine."

With players such as Johnson and Adeoye not returning for Southeast's frontcourt, Nutt says that he hopes for freshman forward T.J. Thomas, who only played in 15 games this season, to step in.

"If I had to do it all over we would've redshirted him," Nutt said. "We felt like we were going to need him and so we played him in some early games, but we just decided to go with the experience. We decided to go with Nino Johnson, Aaron Adeoye and Josh Langford and so we just kind of stuck with the experience and he just kind of got lost in the shuffle."

Nutt went on to say that he thinks Thomas improved every day in practice and that he has what it takes to be one of the unselfish players that Nutt and his staff are looking for.

"Just like I told our team, in the game of basketball, it's not all about the basketball court," Nutt said. "It's about doing everything right every day, it's about taking care of business, it's about going to class, it's about maintaining good academics and it's about being the most unselfish player you can be on that floor. With all of that being said, I'm really proud of our team in a lot of ways because we fought through a lot of adversity and a lot of situations that included injuries with our team and we never could really get to a consistent level, we were up and down.

"But I was really glad to see that in the last eight or nine games we were really a good basketball team and very competitive. There's no such things as moral victories or moral seasons, it's either you win or you lose and I'm a firm believer in that. I do feel like we're close."

Nutt said that the team will be spending a good amount of its time in the weight room this offseason.

"I just feel like that we can be a much stronger team with a very tough spring training," Nutt said. "I think the weight room is going to be very important this spring and summer and we'll continue to work on the individual skills, shooting the ball. Right now we've got recruiting to do, we're going to add to this basketball team and we're looking forward to the future -- we're looking forward to the spring and summer and these guys are getting better."