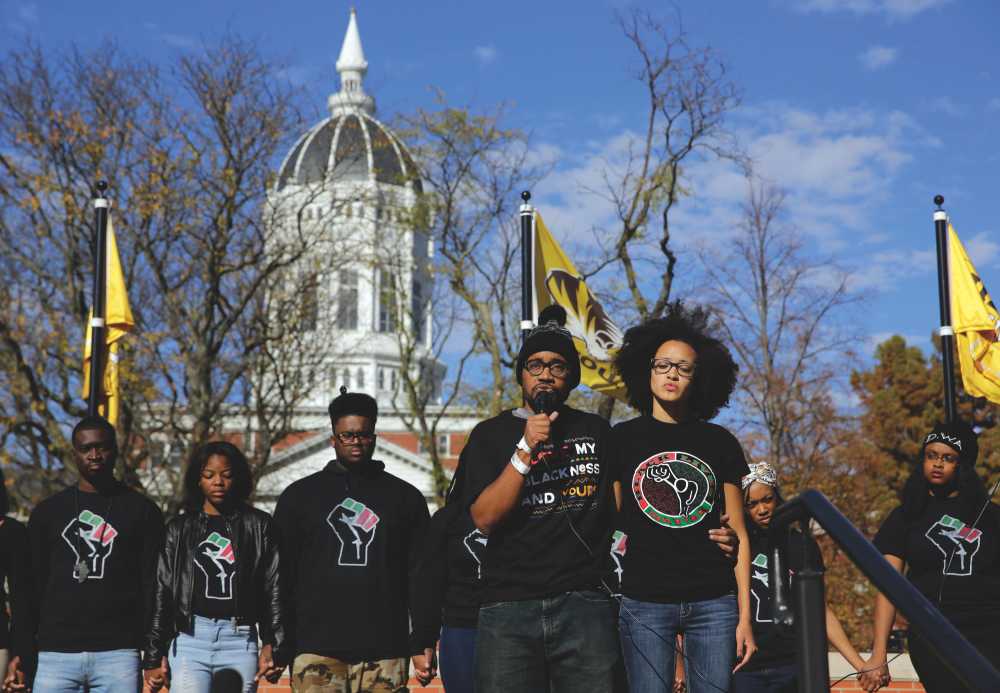 University of Missouri graduate student Jonathan Butler announced roughly a week ago he would go on a hunger strike for an indeterminant amount of time due to university president Tim Wolfe's lack of regard for racial and discriminatory issues on campus.

On Monday, Butler's protests, along with the support of members of the football team, faculty and other students, were finally listened to when Wolfe publicized he would step down from his role.

Kayelle Brunin, a senior at the university, saw the events unfold in Carnahan Quad. Protesters' linked arms and unified "We shall overcome" chant connected them on a much deeper level than purely external.

She said she hasn't seen much attention given to matters concerning diversity from the time she started as a freshman. From the derogatory slurs students like Missouri Students Association president Peyton Head had to hear to the cotton balls thrown on the lawn of the Gaines/Oldham Black Culture Center during Black History Month, racially infused tensions began to mount, generating a domino effect. When human feces formed in the shape of a swastika were found in a bathroom in Gateway Hall, things had gone too far for too long.

"Just looking even at Yik Yak or certain people's Twitters, the way that they're talking about perceiving this movement shows that we're not really all that there for our minority students," Brunin said.

Brunin added, though, that the racial tensions leading up to Butler's objection had far surpassed anything she observed before.

"I don't know if he had other choices, but the choice that he made obviously worked, and it got people behind it, it got people talking," Brunin said.

"You have various offices and deans that are very supportive of the efforts, and they're working on ensuring that the curriculum reflects society in general and the curriculum reflects dealing with the '-isms,' including racism and others," Morris Jenkins, dean of the College of Health and Human Services and co-chair with Dr. Debbie Below on the task force, said.

Jenkins said he's noticed increased involvement and discussion among university students, faculty and staff since its application in the spring.

"I have seen professors look at their curriculum and change their teaching methods to ensure that we're dealing with some of the issues," Jenkins said.

But there's still work to be done.

"Also, we've been working with the community on encouraging folks of color and others to become a part of law and law enforcement and the criminal justice system in general because, in Missouri, there's not that much representation of blacks and Latinos," Jenkins said.

According to Jenkins, issues on race are at a "tipping point" in the United States, and if what occurred at the University of Missouri didn't happen there, it would've happened somewhere else. He said student involvement was a catalyst to the movement.

"I'm glad to see students get active," Jenkins said. "I think that they're the ones, the young people are the ones that spearhead social change, and that's happened historically, starting with the American Revolution all the way through to today."

Although, he added that Wolfe's resignation was just as integral of an aspect to sparking change.

Brunin said it would have better served Wolfe to address the problems firsthand with diversity training and minority student safe spaces rather than repeatedly ignore glaring incidents of discrimination.

"It's uncomfortable to talk about for everyone involved, but if we don't talk about it, things aren't going to change, students aren't going to be able to learn," Brunin said. "It's really, really hard for people to face racism because they have to look at themselves and see the mistakes they're making and the way that they're being racist, whether they mean to or not. But if he just created this discussion with the black students and with the rest of our students, I think that could have changed a whole lot, made us feel like he cared."

Despite the route taken, positive change is happening -- little by little -- but it's happening.

"There was nothing but joy when it happened," Brunin said. "I saw tears of happiness and a lot of people dancing, a lot of people cheering, it was overwhelming positivity and solidarity there on campus today."