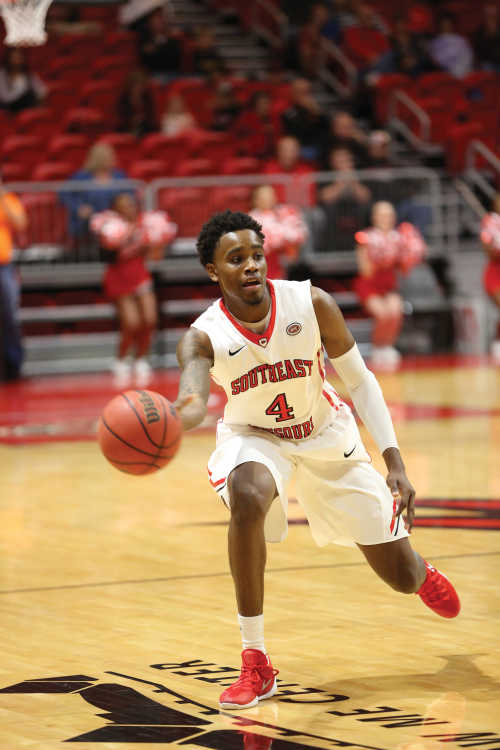 Junior guard Antonius Cleveland shovel passes the ball in the Southeast men's basketball team's exhibition game against Missouri S&T on Nov. 7 at the Show Me Center.
Photo by Jeganaath Giri

The Redhawks started their season on Nov. 7 in an exhibition game at the Show Me Center against Missouri S&T where they won the contest 93-64.

Southeast was picked to finish fourth in the Ohio Valley Conference by OVC head coaches and sports information directors at the conference’s annual media day on Oct. 20.

“I pay zero attention to the preseason predictions and preseason publications because you look at the situation right now and everybody talks about, like, Utah,” Ray said. “Nobody had Utah being the best team in the Pac 12 at that point in time. Everybody had Auburn to win the SEC West in football and be a national championship contender. So those are things you don’t really worry yourself or concern yourself about, just go out and work.”

Ray was hired as the team’s coach in April, and his first order of business with the team was to build relationships with its members before doing anything else.

“Well relationships boil down to one thing, I think it’s spending time with that individual person outside of basketball,” Ray said. “I think they all know that we care about them on the court because we’re invested in that, but to make sure that you guys understand that we’re invested in you off the court. So we spent a lot of time off the court not just talking about basketball but academics, their life, and just making sure those guys understand we care about them as a person.”

Before coming to Southeast, Ray was the head coach at Mississippi State where the team went 37-60 in his span.

Ray wants Southeast to run a fast break offense this season, and he says it all boils down to the team’s defensive intensity, which has been a focal point this offseason.

“His big thing is defense,” sophomore guard Marcus Wallace said. “Just up pace, always running everywhere we go. Nothing we ever did was really slow, we always jog to get water, jog to do this, run to do that. This year it’s going to be a lot of fast-paced type of ball and I think it will be fun for the fans.”

Wallace added that he has never worked on defense this much in his entire basketball career, but that it is going to pay off for him and the team this season.

“We’ve got to make sure we get stops,” Ray said. “The only way you can truly be a fast break basketball team is if you give me stops on the defensive end. We also want to make sure we’re getting deflections and knocking the ball loose and turning our defense into offense.”

Practice has changed drastically from last season, and junior guard Antonius Cleveland agreed, saying it was his toughest offseason at Southeast yet, and that Ray holds everyone accountable for what they do.

“He’s not going to let you get away with a mistake,” Cleveland said. “He sees everything, he’s going to stop it and correct it. So it’s more so just doing the right thing the whole entire time and just getting everything right, just playing hard because if you don’t play hard, he’s going to let you know. So it’s either play hard or get on the line, and no one likes to get on the line.”

What Ray has talked about with his team the most during practice is the team’s pace of play. He doesn’t want his players wasting any motion or movement whatsoever, and he wants them engaged the entire time.

“So we want to go from drill-to-drill at a fast pace and we want to make sure we’re getting ourselves in shape, and not just physically but also mentally,” Ray said. “When I call out something, I don’t want to have to explain it. I want it to be a situation where it’s rapid movement. They’ve got to think quickly and so that’s what’s going to happen in a game. So we want to make sure we have that in practice as well.”

Three things Ray will expect from his team in every game is for them to play harder, tougher and smarter than the other team.

Southeast trailed Missouri S&T 41-40 and had 15 turnovers in the first half of play at the Show Me Center.

The Redhawks outscored Missouri S&T by 30 points in the second half with Wallace playing a total of 14 minutes and a recorded 14 points and three steals.

The only player on Southeast’s roster to be named to the Preseason All-OVC team was Cleveland along with nine other players in the conference.

Cleveland says he will take his game to a whole other level this year by picking up his game on the defensive end and his intensity so that his teammates will try and match what he is doing.

This year, Cleveland is entering his junior year with a different objective than in previous seasons — to be a leader.

Cleveland was third on the team in scoring his freshman year by finishing with 9.1 points per contest.

Southeast returns only two of its starting five from last season, one of them being Cleveland, along with senior guard Isiah Jones.

Jones played in all 30 of Southeast’s games last season, starting in 19 of them, averaging 9.8 points per game and finishing second on the team in assists with 57.

Jones was the team’s leading three-point shooter last season, making 63 shots from beyond the arch.

Both players are also the only returning Redhawks who averaged more than 20 minutes a game last season.

Cleveland thinks it will be an easy task for Southeast to replace its starters from last year with players like junior guard Jamaal Calvin and Wallace.

Wallace started in Southeast’s two final games of the year at point guard finished with a combined 17 points and 11 assists.

Before making his starts, Wallace came off the bench for the Redhawks and started making a difference when he played 28 minutes against Harris-Stowe on Dec. 28 and scored 11 points in a 94-66 victory.

Later in the season on Feb. 7 in a win against Eastern Illinois, Wallace played a season-high 31 minutes and scored 18 points off the bench.

Wallace, along with Cleveland, thinks his role for the team this season is to be a leader.

Calvin started in seven games for Southeast last season and ranked third on the team in three-pointers with 23. He will miss the first four games for violating the team’s policies and procedures.

Kellum didn’t play a single minute last season since he had to sit out due to NCAA Division I transfer regulations.

Kellum transferred from Florida A&M where he played two seasons and started a total of 42 games, averaging 8.8 points per game and 6.5 rebounds per game his sophomore year.

Southeast lost both of its starting forwards from last season, Nino Johnson and Aaron Adeoye. Adeoye is currently an outside linebacker for the football team.

Kellum started at one of the forward positions in Southeast’s exhibition game. Another player Ray has been impressed by this offseason who is new to this year’s squad, is junior forward Joel Angus III.

Angus is a transfer from Monroe College in New Rochelle, New York, where he led the team in scoring with 15.4 points per game and rebounds with an average of 8.5 per contest.

When people come to watch the Redhawks play basketball in the newly renovated Show Me Center, Ray wants his team to be symbolic of the Cape Girardeau community.

“I think this is a blue collar town that really kind of rolls their sleeves up and works, and I think you’re really going to see the same thing on the court for us,” Ray said. “We’re going to play hard, we’re going to compete, we’re going to be competitive and we want to make sure that we’re diving on the floor for loose balls. I want the people to see the energy that we put into the program.”

Southeast will start its regular season on the road at 6 p.m. Friday against Dayton, which advanced to the Sweet 16 in last year’s NCAA Tournament and lost to Oklahoma 72-66.