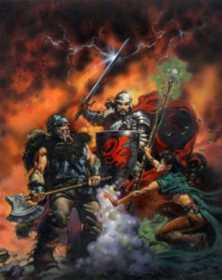 Terese Nielsen, Rick Burchett, William Stout and Paul Gulacy will be the featured artists representing different genres in the comic book industry during the exhibition.

Peter Nguyen, director of the Crisp Museum, said the artists were chosen because of their talent and willingness to participate.

"Most artists are so busy that they have no time to really devote to doing an exhibition or coming out for an exhibition, so we're very lucky," Nguyen said.

Of the four artists whose work will be featured during the exhibition, Nielsen, Burchett and Stout will be in Cape Girardeau at the Crisp Museum for the opening reception on Friday.

Nielsen is widely known for her work in the trading card game "Magic: The Gathering." Nguyen said the magic card game is a fantasy role-playing game similar to Dungeons and Dragons, which is still popular today.

Burchett is a 1975 graduate of Southeast and currently lives in St. Louis. Nguyen said Burchett does artwork mainly for DC Comics. Burchett is well known for the artwork in the cartoon version of "Batman Adventures." He's also done work for "Black Hood," "Green"Lantern" and "Green Arrow."

Stout is widely known for his dinosaur art and has done storyboarding for several movies and films.

The opening reception for the "Heroes, Villains, Monsters" exhibition will be from 4 to 8 p.m. Friday, Nov. 11, and kicks off Cape Mini-Comic Con, which will be held from 9 a.m. to 4 p.m. Saturday, Nov. 12, at the museum. Both events are free, family-friendly and open to the public. Artists will be signing autographs for fans and doing commissions.