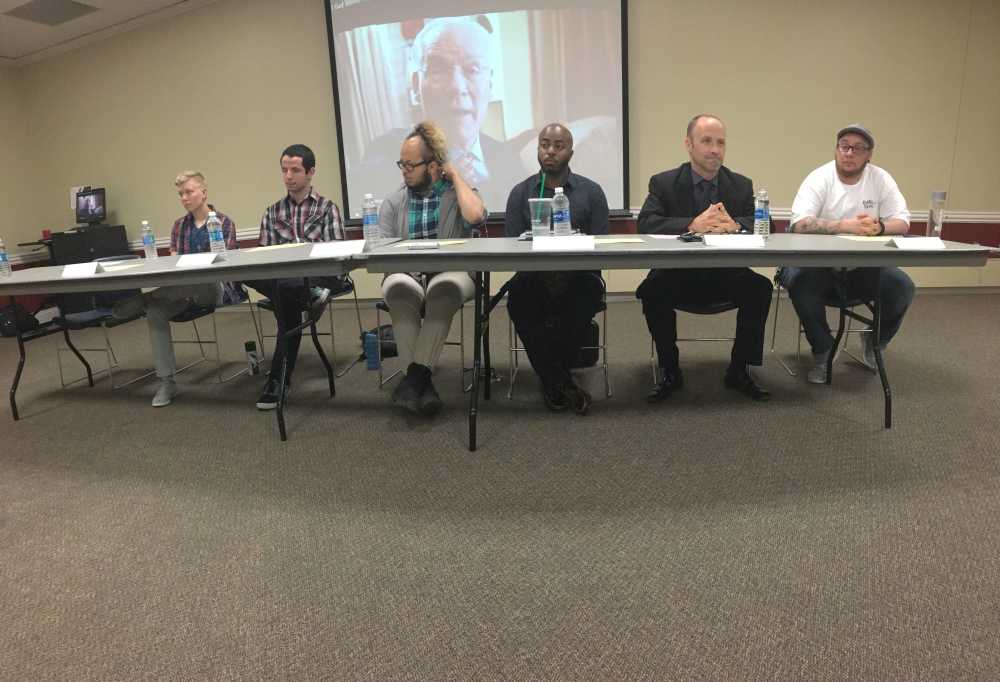 The panel discussion gave an inside look at the lives of members of the LGBTQIA+ community and how to make the community more inclusive at Southeast Missouri State University. LGBTQIA+ is an abbreviation for Lesbian, Gay, Bisexual, Transgender, Intersex, and Ally. Emmett Poss, Duane Jones, Robert Turner, Nando Lopes, Rane Belling, and Dr. Robert Greim all gave valuable insight to the struggles of the LGBTQIA+ community.

Emmett Poss, a senior at Southeast that identifies as transgender, has been medically transitioning since his sophomore year. He spoke about some of his experiences since he began his journey.

“It’s hard,” Poss said. I’ve been followed home from downtown, had death threats against me, things written on my car.”

Poss talked about his experiences off campus as well as on campus, particularly in the classroom. He mentioned receiving unpleasant remarks from classmates, but ultimately attributed high praise to his professors, who quelled many of those situations.

“The professors, with them using my preferred name and pronouns, nipped that pretty quick,” Poss said. “If it wasn’t for them, I don’t know what I would do.”

Dr. C.P. Gause, Chair of the department of Educational Leadership and Counseling, who moderated the event, posed a question that held much significance for the student body.

“Would you want those people making unpleasant remarks to address you and say I have a question for you,” Gause said. “I was wondering how you identify? Would that bother you?”

Emmett’s response should help ease any fear his fellow student may have had about asking him questions about his identity.

“Not at all,” Poss said. “With questions like that, it becomes education. You can’t spread awareness if you can’t educate.”

Education was of fundamental importance to the panelists because once you educate yourself about a community, you become more aware of their struggles and can then begin to build relationships by possibly identifying with them.

The panelists discussed the fear which is associated with being open about who they are, and the need they feel to have permission to be themselves. Dr. Woods, Professor of Biology at Southeast, offered a bit of advice that helped her once she arrived at Southeast.

“It’s about being me without ever asking to be gay,” said Woods.

Woods identifies as a lesbian and knew from personal experience the fear the panelists were discussing throughout the LGBTQIA+ community.

The idea of inclusiveness was talked about extensively. The need to take the inclusiveness that can be found on campus to the surrounding community is important for the success of the LGBTQIA+ students both academically and socially.

“Southeast is always working to be inclusive,” Rane Belling, President of Southeast’s PRIDE organization, said. “We need to take that inclusiveness off campus.”

Robert Turner, a graduate student at Southeast, spoke about the need for more people to enter into the discussion.

“Everyone should be a part of this conversation,” Turner said. “The issues that affect me affect everyone. Until we are all free, none of us are.”

The panel gave valuable insight into the lives of members of the LGBTQIA+ community, allowing people to see their struggles, while also educating in order to help people become more inclusive and accepting of who they are.