Student section looks to grow with the addition to Rowdy Crowd

Over the last two years, Southeast has been looking to establish a student section that radiates energy to add to the Redhawk game experience.

“You see a lot of times in high schools in Jackson, Cape Girardeau and St. Louis,” coordinator of marketing and promotions Phillip Lady said. “They have these high-school cheering sections that are established, and what it is, its groups that come up and brain storm theme nights and they provide feedback on different giveaways and are a voice for the students.” 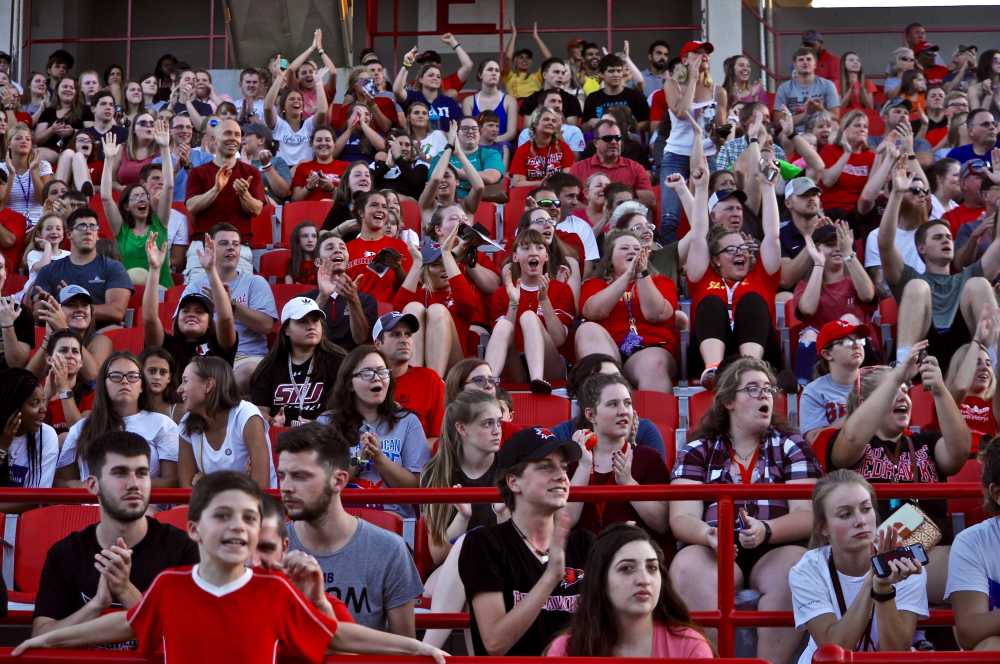 Lady said that unlike high-school student sections, college tends to be divided and students do their own thing rather than all sitting together to cheer on the team.

“We’re looking for the ones that want to be a part of something special and exciting, to be a leader in the cheering section for the rest of the fans to all come together,” Lady said.

Last year when Alexia Koerkenmeier came to Southeast as the marketing and promotions graduate assistant, Lady came up to her and said he really wanted to form the Rowdy Crowd. When they were working on forming the organization, they found group of people at a soccer game last season that was cheering loudly.

“We got with them, we told them the idea and they were very adamant on doing this,” Koerkenmeier said.

They were hoping to start the Rowdy Crowd last year but they didn’t have everything together yet since their planning time was limited.

“This summer we’ve been really building it,” Koerkenmeier said. “We started getting people signed up at the First Steps. We’re just taking it and hopefully seeing it grow.”

To get Rowdy Crowd started, they reached out to international students to help start the group.

Lady said with soccer being a world sport, the international students are drawn to it and they can relate to it since they know the sport very well.

Lady and Koerkenmeier’s goal for the Rowdy Crowd is to form a leadership council that can take ownership of the group.

“Will all of them be at a game at any given time? No, but we hope at least that some will,” Lady said. “Whether it be a Friday night soccer match or even football. We hope to have representation from some at every game or match”

They hope that when people start seeing the Rowdy Crowd, they will want to join so it isn’t just a couple of people cheering at a game - that it becomes a group.

“We really want people to be a part of it,” Lady said. “It’s something that we’re just trying to get off the ground and once we do, we really think over the next few years it could really take off.”

“Grand Canyon has probably one of the best student sections in the nation. So if you look across the nation, a lot of people are starting these student section groups and cheering groups that have really helped grow and boost student spirit and attendance,” Lady said.

Koerkenmeier believes having the Rowdy Crowd will help the play of student-athletes.

“Just seeing the way we played basketball, we had a game with a lot of people and the atmosphere was amazing and our student section was huge,” Koerkenmeier said. “They literally filled up the entire student section and were off to the side. So just having an atmosphere like that, you can tell that the basketball team is playing better.”

“There’s a bunch of energy when we have drums and people cheering constantly, it definitely brings the energy to us to keep going, keep pushing through and give them a good game as well,” Lierz said.

“We always come out hard,” Southeast soccer defender Shay Darga said. “But there’s always that little extra something when you know that all of these people are here and just cheering you on and wanting to see you do well.”

Athletes want to play in front of a large crowd and they thrive off of that atmosphere.

Dues to be a member of the Rowdy Crows are $10 annually.

“The idea behind that is to completely reinvest the money back into the Rowdy Crowd for items, events, a shirt when you sign up, and then we’ll take the other money to help with some of the other events,” Lady said.

There are meetings involving the Rowdy Crowd, but since they don’t want to overwhelm students, students can touch base with Koerkenmeier at akoerkenmeier1s@semo.edu or (573)-986-6139 before the beginning of each season.