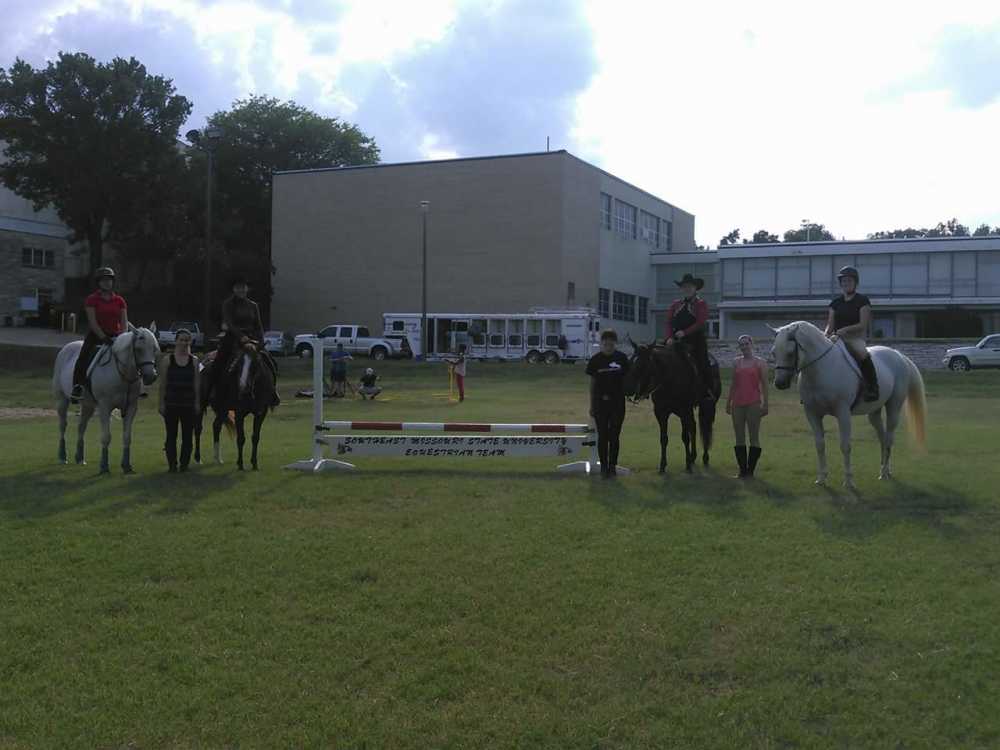 The Southeast equestrian team is entering its seventh year and is looking to grow the team as the 2017 season is underway.

The Southeast Equestrian team competes through the Intercollegiate Horse Show Association (IHSA). The IHSA offers both hunt and Western styles of competition.

“The [Western style] is slower, one handed, cowboy hat,” team president Hailee Long said. “Then the hunt seat-imagine chasing foxes. So more forward, jumping. We can do hunter over fences and hunter on the flat, which is just the style of riding that you use if you’re going to be hunter over fences but you don’t actually jump.”

The team meets at the Remley Equestrian Center, 10 minutes north of campus, which is owned by their coach SuAnne Remley. At the barn they do lessons to learn how to ride horses with either Remley or with their traveling coach Ashley Mann.

“[Ashley] is the one that goes to the shows with us,” vice president Tina Johnston said. “We have to have a coach with us on hand at every show that we go to.”

The equestrian team is a sports club, so it is recognized by Recreation Services and is a registered student organization as well with Campus Life.

Through the IHSA, there are nine zones in the country that are broken up. Within those zones there are different regions. Southeast is in zone seven, region five, meaning the team competes against Kansas State, Kansas University, St. Louis University, Washington University, Northern Illinois, Illinois State and other regional universities.

When the equestrian team goes out to compete for a show, the host school provides horses and each competing student has to draw which horse they will ride.

“They provide a little description sheet, so you can see that if you draw you know what the horse is like,” Long said.

According to Johnston, you don’t get to ride the horses until you are in the arena being judged.

Also according to Johnston, when teams arrive at the arena the horses are schooled by the host team. The visiting team rides them around so the visiting teams can get to know the horses before riding them themselves.

When a horse gets schooled, the trainers run the horses through gymnastic exercises.

“You get to watch all of their horses be schooled,” Johnston said. “So they are riding them around and jumping them and you kind of get to see all of the horses’ quirks and how they are but you still don’t know which one you are going to get to ride.”

The majority of the shows are on Saturday and Sunday, and each day is a separate show. With the size of the team they are able to compete both days. According to Long, with the team expanding they are only allowed to have a certain number or riders in each division, so everyone might not be able to ride.

“There’s walk trot, walk trot canter, novice, intermediate and open. So for walk trot you may only be allowed two riders per show,” Long said. “But the nice thing is as riders place, they earn points so you can point up into the next division.”

There are currently 15 to 20 members. This year to find new members, they brought horses to Parker Field and did a small demo. They also painted on the mural wall next to Parker Field to advertise for their new member meetings, which are every Wednesday during common hour in Dempster Hall 127.

“We go to every Show-Me Day, recruitment event and opening week activities,” Long said. “We send flyers to Residence Life and they put them up on every floor.”

Anyone can join the equestrian team. They like to say “No Horse, No Experience, No Problem” for people who have never ridden a horse before.

Long said that being part of the equestrian team is a wonderful experience and teaches you many life lessons.

“You learn a lot about responsibility, commitment and teamwork, but not just with other members of the equestrian team but with the horses,” Long said. “You have a teammate that doesn’t speak English.”